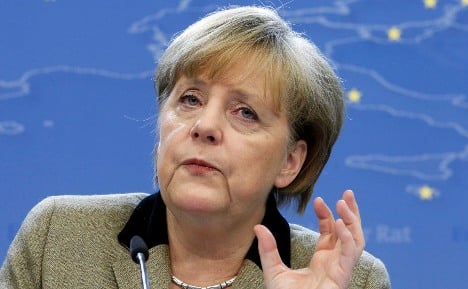 “If Europe today accounts for just over seven percent of the world’s population, produces around 25 percent of global GDP (gross domestic product) and has to finance 50 percent of global social spending, then it’s obvious that it will have to work very hard to maintain its prosperity and way of life,” Merkel told the British Financial Times in an interview.

Europe will have to spend more on research and education and overhaul its tax and labour markets to restore competitiveness, she said. “All of us have to stop spending more than we earn every year.”

The chancellor was unrepentant about implementing the policy of austerity measures in response to the euro debt crisis, and reiterated her determination to make contracts with EU partner countries to implement more structural reform.

Merkel also used the interview to explain why policy building takes a little longer in Germany, and why she is often reluctant to commit to a course of action until a consensus has been formed.

“Social cohesion is very important to people in Germany,” she told the paper. “Our federal system means that in Germany competences are distributed between the federal level and the Länder [the 16 federal states].

“Although that sometimes makes politics arduous, it’s also one of our country’s strengths, namely the ability to find good solutions to problems, and for Germany, across party lines.”