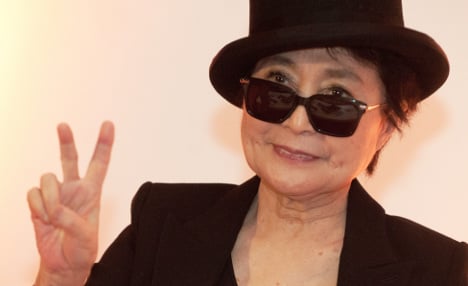 Ono, who will turn 80 in February, picked up the Rainer Hildebrandt Medal at Berlin’s Checkpoint Charlie Museum next to the former Cold War border crossing.

Wearing a black top hat and trouser suit, she gave a two-fingered peace sign as she thanked the jury.

“I’m very honoured to get this award and I will consider this award as an encouragement to do more work in humanitarian causes,” she said.

Hildebrandt, who died in 2004, founded the museum to document daring attempts by East Germans living under communism to escape over the Berlin Wall and in protest against the regime’s shoot-to-kill policies.

“Since the early days of her career, and in addition to her music and conceptual art, Yoko Ono has always drawn attention for her political statements and her fight for peace and human rights,” the jury said.

“She is a great proponent of gender equality, and is committed to world peace and the recognition of same-sex partnerships.”

The Tokyo-born artist — raised in both Japan and the United States in a well-off family of bankers – became a global icon when she married the rocker from Liverpool.

Since her Montreal honeymoon with Lennon, during which the couple called for peace from their marital bed, Ono has used her celebrity to raise awareness for causes.

In 2002, she launched the “LennonOno” grant for peace in Iceland, given every two years.

In honour of Ono’s 80th birthday, the Schirn Kunsthalle in the western German city of Frankfurt will present a retrospective of her work from February.