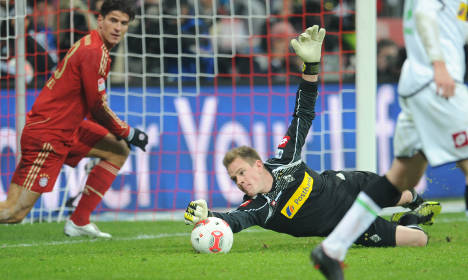 The draw left Bayern 12 points clear of the chasing pack, who are all in action during the rest of the weekend’s programme, while ‘Gladbach move up to sixth.

“The team fought hard, they gave everything and we’re happy to take that point at home,” said Bayern’s director of sport Matthias Sammer.

Having already opened the season with a record eight straight wins, Bayern are hoping to finish the weekend with another achievement as they look to break Borussia Dortmund’s record 10-point lead at the halfway stage.

After Gladbach claimed a half-time lead through a Thorben Marx penalty, Bayern battered their visitors’ goal and the torrent of chances finally paid off when Swiss star Xherdan Shaqiri equalised with half an hour left.

Gladbach took the lead when Bayern defender Jerome Boateng leapt to block a cross from midfielder Tolga Cigerci and the ball struck his hand.

“I don’t know how the referee could class that as a penalty,” fumed Boateng. “I seriously don’t think it was justified. I think we deserved to win.”

The goal came against the run of play and took the wind out of Bayern’s sails and it looked like history was about to repeat itself after Gladbach had poached a 1-0 win in Munich on their previous visit in August 2011.

Things refused to go the hosts’ way in the first-half as defender Dante headed over while winger Franck Ribery had a shot saved.

Adding injury to insult, defensive midfielder Javi Martinez went off with a facial injury from a stray elbow as Gladbach goalkeeper Marc-Andre ter Stegen pulled off a string of superb saves.

Bayern attacked in waves in the first-half with 11 shots on target compared to the guests’ single attempt.

Only another fine ter Stegen save denied Bastian Schweinsteiger early in the second-half, but the Gladbach defence was finally beaten following a mistake by Cigerci.

His badly-timed pass was snapped up by Shaqiri, who levelled on 59 minutes.

Bayern kept up the pressure as the minutes ticked down, but Gladbach’s defence held firm, despite Bayern’s 14 corners, to leave Lucien Favre’s team unbeaten in their last seven games.

Leverkusen can trim Bayern’s lead back to nine points if they win at home to Hamburg on Saturday.