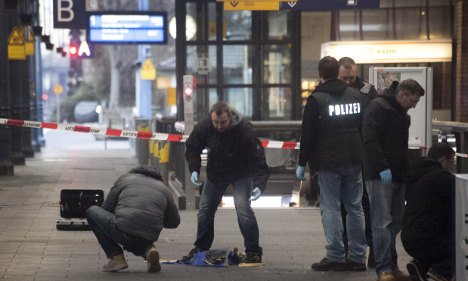 Police investigate contents of the bag on Monday. Photo: DPA

The federal prosecutor said in a statement that there was enough evidence to suggest Monday’s incident was “an attempted explosives attack by a terrorist organisation with a radical Islamist bent.”

It added that there was serious evidence “that the suspicious person has connections in radical Islamist circles,” but gave no details. The prosecutor’s office, which is responsible for probing matters of terrorism, has taken over the investigation.

The blue sports bag was discovered on Monday on a train platform at the station in western Germany containing an improvised explosive device.

The bomb’s detonation device was triggered but for some reason failed to go off, according to reports by broadcaster Westdeutsche Rundfunk (WDR) and Der Spiegel magazine on Friday – probably because it was put together in the wrong way.

Investigators told Der Spiegel they believed traces of gun powder found in the bag along with batteries that had used up their charge suggested the bomb had been triggered, a theory which police said they were unable to confirm or deny.

“Why the explosive device did not detonate, requires further investigation,” the prosecutor’s statement said.

One theory goes that the bomb failed to go off because the would-be bombers used the filament from a light bulb found at the scene of the crime instead of a “booster” to amplify the explosion, wrote the magazine.

According to WDR, the unknown perpetrator dumped the blue bag on the platform then quickly disappeared in order to detonate the bomb from a safe distance. Its discovery sparked the complete evacuation of Bonn station.

Authorities said on Wednesday that if the explosive had gone off, it could have had a similar effect to the 2004 al-Qaida bombing in Madrid, which killed 191 people.

Norbert Wagner, who headed the investigation for Cologne police, told reporters on Wednesday that had the gas exploded and caused the ammonium nitrate to ignite, “there would have been a significant explosion … that of course would have caused considerable harm to people.”

On Tuesday, police arrested two men, one with links to an extremist Salafist group, but released them, and a day later announced they were looking for two men in connection with the incident.

Since Thursday police have been searching for an important witness, the man who alerted train station employees to the unattended bag on platform one on Monday.

Cologne police say the witness is around 40 years-old, with a European appearance, short blonde hair and a slight speech impediment.