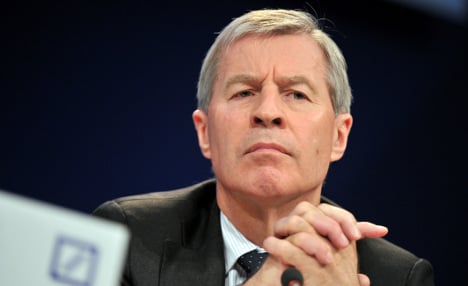 “I’m shattered over the accusations against me. I firmly believe they will prove to be groundless,” Fitschen told the mass-circulation daily Bild. “I feel I am being unjustly treated and will defend myself.”

Asked whether he would resign over the allegations, Fitschen said, “I see no reason to.”

Fitschen made similar remarks in a different interview published in the business daily Handelsblatt.

Prosecutors and tax police raided the offices of Deutsche Bank Wednesday in a probe dating back to 2010, and Germany’s biggest lender said both Fitschen and its finance chief Stefan Krause were also being investigated.

Deutsche Bank employees are suspected of destroying documents related to the case, and investigators also say certain essential emails have been kept from them, the Süddeutsche Zeitung reported. The bank denies the claims.

Four Deutsche Bank workers have been taken into custody, while a fifth suspect has been spared for health reasons.

The allegations date back to early 2010 and concern suspected tax fraud in connection with trading in carbon emissions certificates.

Fitschen and Krause are under investigation because they signed off the bank’s 2009 valued-added tax (VAT) declaration. He told both newspapers that he felt the prosecutors’ reaction was “totally exaggerated.”

“As soon as we realised that we’d been duped by fraudulent clients, we corrected the tax declaration. At no point was any tax money unlawfully paid to Deutsche Bank,” he said.

Fitschen has been a member of Deutsche Bank’s management board since 2009 and took over as co-chief executive, alongside Anshu Jain, earlier this year.

Prosecutors said a total 25 Deutsche Bank employees were being investigated and arrest warrants had been issued for five suspects on suspicion of money laundering and perverting the course of justice.

According to Der Spiegel magazine, the suspects evaded hundreds of millions of euros in tax.

In December 2011, six businessmen – three British citizens, two Germans and one Frenchman – were sentenced to between three and seven years in prison for not paying taxes from trading in carbon emission certificates.