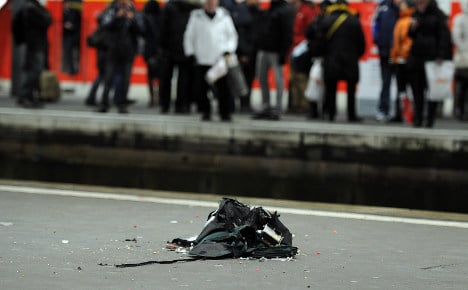 The stray bag sparked a major police operation and caused severe disruption to rail services as platforms were shut down for several hours, after a woman found the luggage and reported it to authorities.

It was only after some time that the police were able to establish that the green sports bag contained only clothing, a pair of scissors, and plastic pens, a police spokeswoman said on Wednesday night.

Like the blue sports bag that turned out to contain a bomb in Bonn railway station on Monday, the bag was destroyed with a water cannon.

Essen police are now searching for the owner of the luggage, who could face a charge of faking a criminal act.

A spokesman for German rail operator Deutsche Bahn said that trains going through Essen, which lies on a busy route from Hannover to the Rhineland region, were diverted through Gelsenkirchen, causing some severe delays.

On Wednesday, police also released CCTV footage from the McDonald’s restaurant near Bonn railway station, which they say shows a man carrying what they believe to be the bomb that was later destroyed.