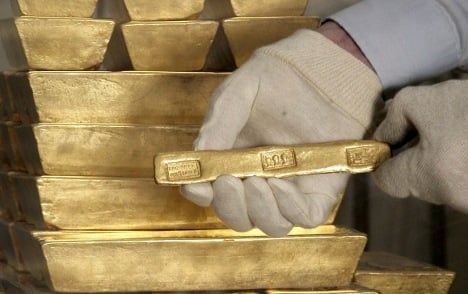 Even though Europe’s largest economy has weathered the world economic crisis relatively well, Germans have still been extra jittery about their savings, a study by the Steinbeis Research Center for Financial Services in Berlin revealed.

Around 32 percent of the gold owned in Germany in the form of bars and coins was accumulated since the financial and economic crises began, the study concluded.

Commissioned by precious metal trading group Heraeus, the study also found that people with surplus cash are becoming gold-greedier. The number of Germans with a net monthly income over €4,000 who say they intend to invest in gold has doubled in the current year.

On average, every German owns around 117 grammes of gold, comprising 55 grammes of jewellery and 62 grammes of bars and coins, the study, which surveyed 2,000 people, found. Taken together with gold securities, the average German owns some €5,750 of gold.

Including the German federal bank’s gold holdings, that means the Germans have gathered seven percent of the world’s gold.

Gold is considered a safe investment in times of economic stress because the precious metal is thought to keep its value over a long period, can be collected and kept safe personally, and can be traded easily.

Some 69 percent of Germans have invested in gold, and roughly half of these keep at least some the metal in their homes. Around 47 percent keep their gold in a private locker in a bank. Around nine percent, meanwhile, keep some of their precious metals with a specialized gold trader.