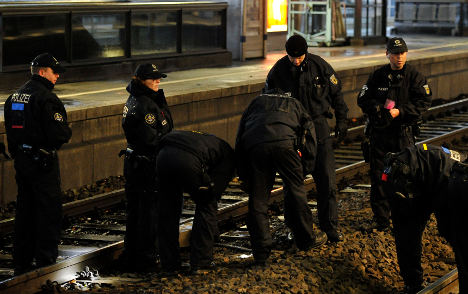 Bild newspaper reported that it had inside information that school children had identified two Salafists known as terror suspects as those who had left the blue sports bag at platform one of the station on Monday.

And Focus magazine’s website said on Tuesday afternoon that one man had been arrested while making his way to his lawyer in Bonn. Security sources told the DPA newswire they expected the federal prosecutor and the federal criminal police to take over the case.

The police have not commented on either report, saying only that they were keeping a completely open mind as to who might have been responsible.

Bonn’s main train station was closed for much of Monday in the bomb scare, which saw explosives experts use a water cannon to smash it to bits.

Examination of the pieces showed the bag contained metal holders filled with powder which could have been explosive, although no detonator was found.

On Tuesday the police said they were conducting a state-wide search across North Rhine-Westphalia, but offered no details of who their targets might be. “We are completely open in our investigation,” a spokesman said.

But Bild newspaper said two Salafist terrorist suspects known to operate under the names Dahir and Buh were thought to have been responsible, and were being sought across the country.

At least two false alarms were reported in Germany on Tuesday where police were called to inspect bags left in train stations.