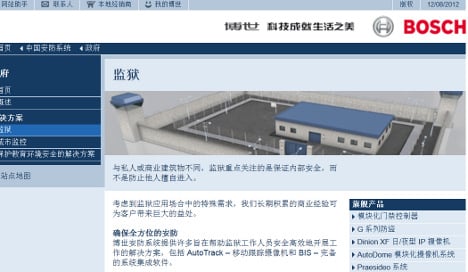 The Süddeutsche Zeitung newspaper reported on Saturday that Bosch had been a prominent exhibitor at the “Security China 2012” trade fair in Beijing.

The Swabian company also had a crudely animated internet site in Chinese which showed prisoners in orange jumpsuits being watched. “Trust us when it’s about your security,” is the Bosch tagline.

Human rights activists criticised the videos, one of which the Süddeutsche Zeitung said showed a guard bringing a prisoner into a visiting room complete with a glass wall.

As the prisoner sits down, the Chinese subtitles say, “Observe the conversation between visitors and prisoner. You decide how long the channels of communication are open.”

The site has since been taken off the internet.

“The People’s Republic of China is an authoritarian state which systematically abuses human rights. It is unacceptable that Bosch intends to profit from helping to maintain the repressive system,” Kai Müller, manager of the International Campaign for Tibet told the paper.

Wolfgang Büttner from Human Rights Watch also criticised the sale of surveillance technology to such countries.

And Volker Beck, parliamentary leader of the Green Party told the paper, “It is shameful that a German company like Bosch intends to profit from this system.” He said firms which sold surveillance and security technology had to be particularly careful where they went.

But Bosch said it was being attacked unfairly, saying it was keeping to all the rules and agreements regarding foreign sales, and thus had, “no basic misgivings about being economically active in China.”

A spokesman said the firm was contributing to positive developments in Chinese society and economy – and added that the sales were not being made directly to prisons or authorities, but to electronics dealers. Bosch could not control where the products were later used, the spokesman said.