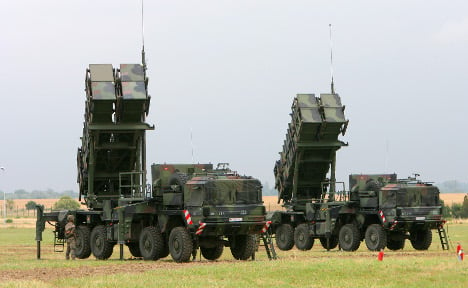 The foreign and defence ministries said in a joint statement that the mandate, which is expected to be presented to parliament early next week, would run to January 31, 2014.

NATO on Tuesday approved Turkey’s request for Patriot missiles to defend its border against Syria following a series of blunt warnings to Damascus not to use chemical weapons.

German Defence Minister Thomas de Maiziere said the troop deployment would help stabilize the region. “The deterrent serves to ensure that the [chemical] capability does not become an intention,” he told reporters.

The alliance said that Germany along with the Netherlands and the United States have agreed to provide the Patriot missile batteries, which would come under the command of the Supreme Allied Commander Europe (SACEUR).

“Turkey is currently the most-affected partner in the Syria conflict. It is exposed to a potential threat from Syria,” the ministries said. “The deployment of Patriot air defence systems in close cooperation with the Netherlands and the US underlines Germany’s reliability as an ally.”

Turkey is a vocal opponent of the regime in Syria, where monitoring groups say over 41,000 people have been killed in almost 21 months of conflict.