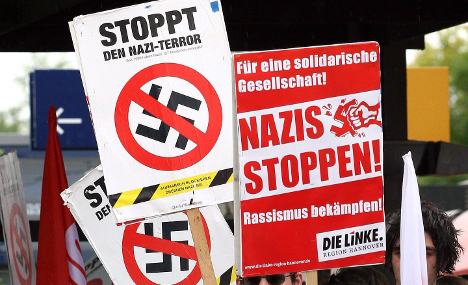 “Therefore it is our clear goal to achieve a ban on the NPD,” he added.

The issue will be discussed in cabinet early on Thursday and Chancellor Angela Merkel will also hold talks with state leaders to chart a path forward.

The federal government, the Bundestag lower house of parliament and the Bundesrat upper house, where the 16 states are represented, are the only bodies in Germany that can apply for such a ban.

But Merkel is cautious about launching the procedure, as is federal Interior Minister Hans-Peter Friedrich.

Her deputy spokesman Georg Streiter told a regular news conference on Wednesday: “It is well known that the chancellor sees significant risks that need to be assessed.”

“What matters for the chancellor is whether such an application for a ban would have a chance of success,” added Streiter.

In 2003, a similar attempt spearheaded by the federal government fizzled because the tribunal found the presence of intelligence agents who had infiltrated the party’s ranks muddied the case against it.

That failed bid stalks the current proceedings, which were prompted by the discovery in November 2011 that a neo-Nazi terror cell was likely behind a rash of killings over a seven-year period in which most of the 10 victims were immigrant shopkeepers.

Friedrich warned that a failure at the country’s top court could play into the hands of the NPD which would exploit it for propaganda purposes.

“It is important that the mistakes of 2003 are not made again,” added the minister.

Some 20 NPD sympathisers, including party head Holger Apfel, protested outside the meeting of state interior ministers, which took place in the northern city of Rostock.

Founded in 1964 with the help of former Nazis, the party has never won seats in the federal parliament and in 2009 scored just 1.5 percent of the vote – far from the five percent needed for representation.

It currently has deputies in two regional parliaments in the former communist east.

Welcoming the interior ministers’ recommendation, the head of the Central Council of Jews in Germany, Dieter Graumann, said it was “high time” for a ban on the NPD.

“For any convinced democrat, it is simply unbearable that far-right extremists get taxpayers’ money to disseminate their brown poison,” he said, referring to the Nazi colour.

“A ban on the NPD can finally end this state of affairs,” added Graumann.