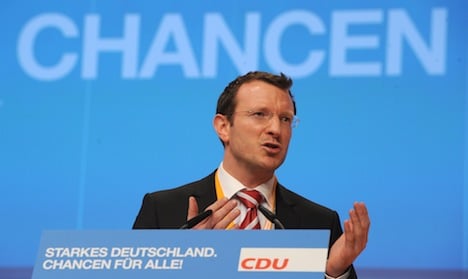 Around 20 delegates filed up to the podium at a two-day congress in the northern city of Hannover — some arguing in favour of a more modern image for Christian Democratic Union (CDU), while opponents defended traditional marriage and the family.

After a thorny debate, delegates roundly supported instead a bid recognizing the “advancement and privilege of marriage” between a man and woman as protected in the constitution.

But after a day devoted mainly to trumpeting the government’s successes, not least in shielding Germany from the euro crisis, the topic proved a thorny issue for the CDU rank-and-file.

“I believe it is important for us that we, as the CDU, acknowledge the social realities and also react politically to them,” Jan-Marco Luczak, one of those driving the call for change, told delegates.

Shortly before the congress, Merkel said she did not favour the tax reform for gay couples because the constitution “sees marriage directly linked to the family and both are under the special protection of the state”. But she also told Sunday’s Bild newspaper that she anticipated a “good, respectful” discussion.

A clear majority of the around 1,000 CDU delegates gathered in this northern city until Wednesday supported instead a compromise motion which acknowledged the values of same-sex partnerships but rejected equal tax treatment.

“God created us humans as woman and man, and I think he thought there was something in that,” Steffen Flath, the head of the CDU group in Saxony state, told the congress.

a decision on the issue by the country’s top court due next year.

Germany introduced registered partnerships of same-sex couples in 2001 granting them similar rights to those of married couples, apart from in tax matters and adoption.

Married couples who have a big difference in salary, or where one partner does not work, benefit from having their incomes pooled in the calculation of their individual tax bills.

“I’m not taking anything away from a married couple,” Luczak said, adding that he was very much in favour of protecting marriage and the family.

But he said homosexual couples also lived according to the values anchored in the CDU’s beliefs. “Two people who support each other and want to assist each other in good and bad times. “I find those are deeply conservative values,” he said to applause.

Less than a year before Germany holds general elections where Merkel hopes to clinch a third term in power, newsweekly Der Spiegel said the CDU was ticking off its controversial topics.

But it noted the debate on gay tax rights was conducted at the party congress “with such earnestness and tolerance, that delegates spoke of a magic moment.”