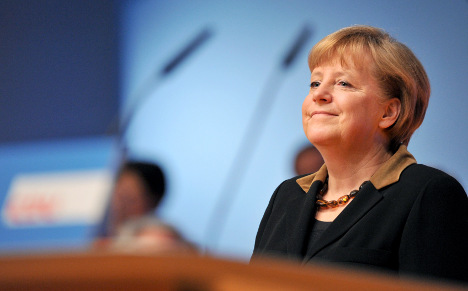 “These are turbulent times and sometimes we even find ourselves in rough, stormy seas,” she told around 1,000 delegates at a party congress of her Christian Democratic Union (CDU) in Hannover.

“But it’s Germany’s CDU which is safely leading and steering our country through this sea and with a clear compass,” she added.

Germany has emerged stronger from the eurozone crisis than it had been when the financial woes in Europe began, Merkel said, adding that her coalition with the Free Democrats (FDP) was “the most successful government” since reunification in 1990.

Buoyed in her position as Germany’s most popular politician, Merkel, 58, is gearing up to lead her party to a third term in power, in general elections due in September.

She was also re-elected head of the party by more than 97 percent of delegates with her best result since taking over as chairman of the CDU in 2000.

When she was last re-elected party leader two years ago, she was unopposed and won 90.4 percent of the vote, her lowest level since 2004, amid fears she could lose more support if the party fared badly in the 2011 “super election year”.

The party did suffer stinging losses in several state polls in 2011 and early 2012, but Merkel has continued to go from strength to strength in opinion polls measuring voter approval of her handling of the eurozone debt crisis.

She is seen as the party’s trump card in its bid for re-election, attracting a level of domestic popularity unseen by any previous post-war German leader,.

Under the banner of “A Strong Germany. Opportunities for All!”, delegates filed into the immense exhibition hall for the two-day congress to Stevie Wonder’s upbeat “Isn’t She Lovely” played by an all-female brass quartet.

“German voters are happy with Mrs Merkel because the majority believe that she is protecting their interests from the needs and desires of other countries,” said political scientist Gero Neugebauer of Berlin’s Free University.

Social issues, including putting gay couples on the same tax footing as heterosexual married ones, introducing quotas for women at the top-end of business, and mothers’ pensions, are expected to be the thorniest points of discussion at the congress.

Another problem on the horizon is the plunging fortunes of Merkel’s current coalition partner, the pro-business FDP, which, surveys suggest, could struggle in the autumn election to cross the five-percent threshold to enter parliament.

Merkel said “it goes without saying” that she would hold talks with the opposition Social Democrats (SPD) and Greens if she was unable to form a coalition with the FDP.

After having led a “grand coalition” with the SPD from 2005 to 2009, she said in an interview Sunday’s Bild newspaper that “it would be totally implausible if I said we are not talking with the SPD”.

“However it remains the case that a grand coalition is not my wish, but rather the continuation of the Christian-Liberal government.”

It said Merkel wanted to turn the party around to make it capable of a coalition and compromise as much with the Greens as with the FDP or SPD.

Her SPD challenger Peer Steinbrück, 65, who was finance minister in the 2005-2009 “grand coalition” has been embroiled in a nagging lecture fee debate since launching his campaign in September.

All eyes will be on a regional vote in Lower Saxony in January as an indicator of voter sentiment.