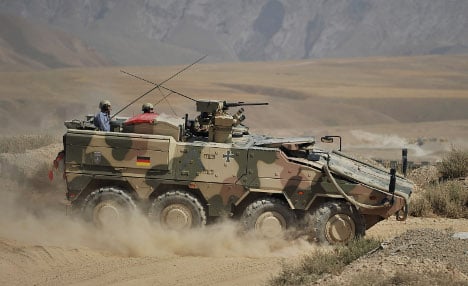 Merkel told public broadcaster ARD on Monday that any decision to sell eight-wheeled armoured “Boxer” transports to the country would be handled in secrecy by Germany’s Federal Security Council.

“Therefore I cannot make a statement about it right now,” she said, adding the government’s foreign weapons deals were regularly presented to parliament. “There you can see decisions that have been made.”

German media reported over the weekend that Saudi Arabia had asked to buy the tank-like armoured vehicles, which can be used in a variety of roles including troop transport and combat support.

There is concern that they could be used to suppress democratic opposition in Saudi Arabia and its neighbours in the Persian Gulf. Last year Saudi troops helped Bahrain’s Sunni Muslim rulers put down Shiite protests which were considered part of the wider “Arab Spring” democratic movement.

Though she would not comment on the specific “Boxer” inquiry, Merkel said Germany always attempted to balance human rights issues with helping ensure stability in the region. She expressed the “very, very serious threat” posed by Iran’s nuclear ambitions and the need for “strategic partnerships” in the Gulf.

One of the most modern armoured vehicles in the world, the “Boxer” is more mobile than a light tank and is reportedly well-suited to putting down urban revolts.

The opposition Social Democrats (SPD) on Tuesday demanded a new parliamentary committee be set up to handle such controversial arms deals.

The SPD’s demand was supported by the foreign policy spokesman for the Free Democrats (FDP), the junior coalition partner to Merkel’s conservatives.