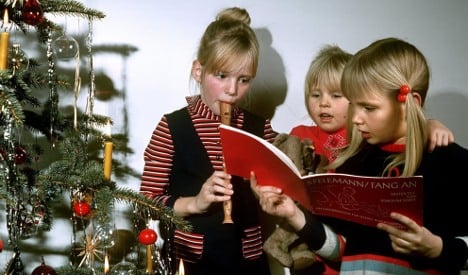 600 The number of years Germany´s oldest Christmas song, “Josef, Lieber Josef Mein,” has been around. The song, known in English as “Joseph, My Dear Joseph,” was supposedly written by the Monk of Salzburg, who adapted it from a Latin Christmas hymn. It has been a staple of German Christmas services ever since.

94 The number of weeks Wham´s “Last Christmas” has spent in the German singles chart, making it the country´s most successful Christmas single of all time. The song also dominates the German airwaves at this time of year: it´s been one of the top-five most played songs during the run-up to Christmas since 1997.

24 The percentage of Germans naming the classic “Stille Nacht” – equally loved in English-speaking countries as Silent night – as their favourite traditional carol. The haunting piece was first played on Christmas Eve 1818 in a church in Salzburg, Austria. Written by the church´s priest Josef Mohr (1792-1848) and the organist Franz Gruber (1787-1863), UNESCO has even enshrined it as part of Austria´s immaterial cultural heritage.

90 The percentage of Germans claiming to know at least the first line of the historic Christmas folk song “O Tannenbaum” or “O Christmas Tree” by heart. The original version of the song first appeared around three hundred years ago.