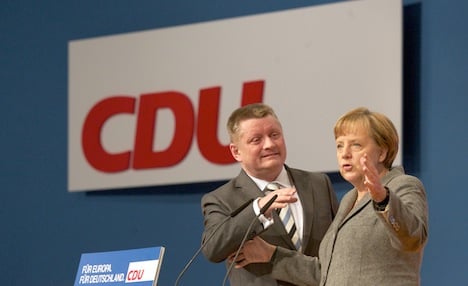 With general elections looming in less than a year, Merkel will address the rank-and-file of her Christian Democratic Union (CDU) at its annual two-day gathering in the northern city of Hannover starting on Tuesday.

Even after seven years at the helm of Europe’s top economy, the 58-year-old enjoys a level of domestic popularity unseen by any post-war leader before her despite heading a fractious centre-right coalition.

During Europe’s economic woes, she has become the ‘go-to’ leader — named by Forbes magazine as the world’s most powerful woman for six out of the last seven years — but has also been maligned for her pro-austerity mantra on the streets of crisis-ravaged eurozone nations.

She is expected to be easily re-elected head of the party she has led since 2000 at the congress.

Merkel recently set the campaign tone boasting hers was the “most successful government since reunification” in 1990, as Germany weathers Europe’s protracted crisis better than many of its neighbours.

In an interview with Sunday’s Bild newspaper, Merkel said Germans were

better off today than three years ago but much still had to be done.

“Fortunately we have more people in work than ever and clearly fewer unemployed than before my time in office — that’s not only, but also, to do with clever politics,” she said.

However, she may now face choppier waters amid signs that Germany is beginning to feel the pinch with slowing growth in the third quarter and rising unemployment in November.

Germans tend not to vote primarily for personalities but the CDU will focus its battle for re-election on the current chancellor, political scientist Gero Neugebauer of Berlin’s Free University said.

Her party, he noted however, is also in a “favourable position”. “It has the so-called strategic ability to form a majority, that means no government can be formed against it or without it,” he told reporters.

Despite dwindling public appetite for stumping up more cash for struggling eurozone countries, Merkel has repeatedly won parliament’s backing for crisis-fighting measures over the past three years.

But if the crisis drags on, Merkel’s credibility could be hit, Neugebauer said.

“The worse the crisis gets and thus the worse the effect on German budgetary and fiscal policy and it also becomes clear to the voters that less money is available for national projects — that can harm Mrs Merkel,” he said.

Raised in former East Germany and the daughter of a Protestant preacher, Merkel rose through the CDU ranks as an outsider in a party of mainly Roman Catholic family men from the wealthy southwest.

She has shaken up the party with a change in direction on education and family policy, support for a form of minimum wage, as well as scrapping conscription and phasing out nuclear energy, Neugebauer added.

“She has taken away a part of its conservative identity by conducting a modernisation policy,” he commented.

Merkel told Bild she anticipated a “good, respectful” discussion on the tax treatment of gay couples in Hannover.

She said that she did not favour putting gay couples on the same tax footing as heterosexual ones because the constitution “sees marriage directly linked to the family and both are under the special protection of the state”.

Another problem on the horizon is the plunging fortunes of Merkel’s current coalition partner, the pro-business Free Democrats, who, surveys suggest, will struggle to cross the five-percent threshold to enter parliament.

Merkel’s CDU and its Bavarian sister party, the Christian Social Union, lead the main opposition Social Democrats by 11 points, according to a poll for Stern magazine and RTL television last week.

Her main rival, Peer Steinbrück, 65, of the SPD, a former finance minister in a 2005 to 2009 “grand coalition” with the CDU, has been embroiled in a nagging fees-for-lectures debate since launching his campaign in September.

All eyes will be on a regional vote in Lower Saxony in January as an indicator of voter sentiment.

Since the 2009 federal elections, the CDU has suffered a number of stinging losses regionally.