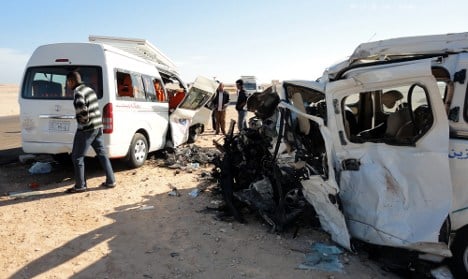 Two mini-buses crashed into each other on the road into a resort about 40 kilometres south of the popular tourist destination Hurghada, the officials said.

The German victims were employees of the TUIfly airline who were returning to the local airport, the airline confirmed on Sunday afternoon. The Egyptian driver and another Egyptian member of staff accompanying the employees were also both killed.

“We are stunned and shocked. Our sympathies go out to the families of the dead,” said Dieter Nirschl chairman of the TUIfly executive board. German Foreign Minister Guido Westerwelle also expressed his sympathies at the news.

Road accidents are common in Egypt, largely due to bad road conditions and lax enforcement of traffic laws.

On Friday, two Russian tourists were killed when their bus overturned near the Sinai resort of Nuweba, police said. And on November 17, 47 Egyptian school children were killed when a train smashed into their bus in central Egypt.