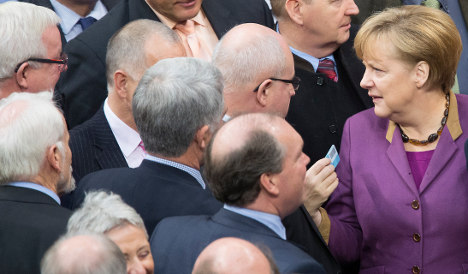 MPs voted by 473 to 100 to give the green light to the release of €43.7 billion in aid to debt-wracked Greece agreed after torturous talks between eurozone finance ministers. There were 11 abstentions.

The result of the vote was secured in advance after the two main opposition parties vowed to support Chancellor Angela Merkel’s ruling centre-right coalition, with less than a year until elections.

But a breakdown of the vote showed that Merkel did not have to rely on the opposition to win. From her own coalition ranks, 297 deputies voted in favour, enough to carry a majority from the 584 votes cast.

Before the vote Finance Minister Wolfgang Schäuble had pointed to the significant efforts made by the Greek government to implement reforms demanded in return for the aid and warned of the consequences of letting Athens fall.

“Without our support, it would not only be the future of Greece at stake, but also the future of the eurozone as a whole,” Schäuble said.

“The potential impact of a Greek default on other eurozone countries and the eurozone would be serious. The consequences are not foreseeable. We cannot start a process that could end in the break-up of the entire eurozone.”

Although the opposition Social Democrats (SPD) voted largely in favour, political debate has raged over whether German taxpayers will eventually have to accept losses on Berlin’s holdings of Greek debt.

Many in Germany consider that a so-called haircut – or write-down of Greek debt holdings – by public institutions like other eurozone governments and the European Central Bank is inevitable.

And opposition politicians have accused Chancellor Angela Merkel of playing down the need for a haircut on Greece, fearful of the impact on her chances in the federal election expected to take place on September 22.

Schäuble said that speculation about such a haircut sent “exactly the wrong incentive” to Greece, arguing that it reduced the pressure on the government in Athens to enact structural economic reforms.

But the SPD’s parliamentary head of the SPD, Frank-Walter Steinmeier, accused members of the governing coalition of being inconsistent and making comments in an “irresponsible way” about Greece’s future in the eurozone.

A haircut for Greece further down the line was inevitable, Steinmeier argued, telling Merkel: “All you have bought is time.”

Merkel’s challenger next year, former finance minister Peer Steinbrück said ahead of the vote that his Social Democrats would vote in favour “not to support the government but out of political responsibility for Europe.”

Der Spiegel magazine pointed to the difficulties faced by the SPD as it battles to define itself and its policies ahead of the federal election.

“With less than a year to go before general elections, the centre-left opposition party finds itself struggling to distance itself from Chancellor Angela Merkel on the election season’s most important issue: the euro crisis,” it wrote in its online edition.

“And that failure could weigh heavily on its chances” in September, it suggested.

Following a series of landmark decisions by the country’s top court, Germany’s parliament must vote on any new rescue packages in the eurozone or major changes to existing packages.

Finland and the Netherlands are the only two other eurozone countries where parliamentary consent is needed to unfreeze funds for Greece.

Also included in the package is a debt buy-back scheme, in which Greece is loaned money to repurchase its debt at lower prices on the market.