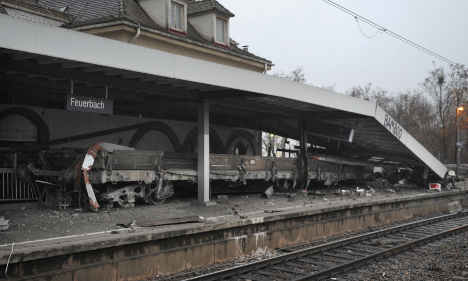 According to initial investigations by the police, the heavily loaded cars rolled out of a freight depot some time Thursday night, for unknown reasons. Traveling on a downward sloping seven-kilometer stretch, the cars picked up speed, and started barreling toward central Stuttgart.

A Deutsche Bahn employee noticed the runaway cars, and around 4 am diverted them to a buffer stop at the Feuerbach S-Bahn station.

Two of the freight cars derailed onto the track bed after colliding into the buffer stop, but a third car smashed onto the train platform, causing the roof of the platform to partially collapse.

“There is considerable property damage,” said a spokeswoman for the federal police. No one was injured in the accident, but a residence above the train station’s building was evacuated.

Police said a structural engineer will evaluate Friday whether or not the roof has to be torn down, and police will continue to investigate what caused the cars to start rolling out of their station.

Local and regional train passengers can expect delays all day Friday, and the stretch between Kornwestheim and Feuerbach has been temporarily closed. ICE train travel in and out of Stuttgart will not be affected.