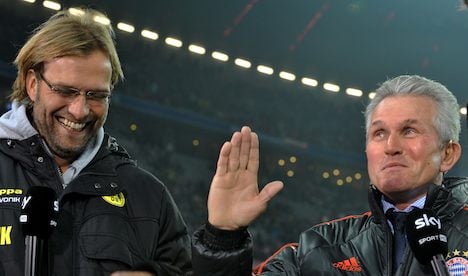 Bayern extended their lead at the top of the league to 10 points on Wednesday with a 2-0 win at SC Freiburg while BVB Dortmund, who have won the title for the last two years, lag behind in third and are 11 points adrift.

Munich managed a 2-1 pre-season victory at home to Dortmund in August’s Super Cup, but the Bavarian giants are eager to break a Bundesliga run of four defeats in their last four league meetings with Borussia.

Bayern midfielder Javi Martinez, who joined Munich from Athletic Bilbao in August, has likened the Dortmund-Bayern clash to the Real Madrid-Barcelona El Clasico in Spain.

“I have followed the duel in Spain and it is a bit like the Clasico,” said the 24-year-old. “There have always been problems against Dortmund and we have to change

“Dortmund are the team with the highest quality after us,” he said. “We know they are a strong opponent against whom we have had big problems in the last two years. We want to show we can do better against them.”

Bayern will have virtually a full strength squad to choose from with only Luiz Gustavo and Arjen Robben out with injury. Dortmund have a few concerns of their own with midfield pair Mario Götze and Ilkay Gundogan and defender Mats Hummels all facing a race to be fit.

Both Hoffenheim coach Markus Babbel and his Augsburg counterpart Markus Weinzierl are under pressure to turn results around with both teams in the bottom three.

Hoffenheim, who host Werder Bremen on Sunday, are 16th after their 4-2 defeat at Nuremberg which saw Babbel criticise his players, while Augsburg are home to Freiburg on Saturday.

“This is not about Markus Babbel, this is about TSG Hoffenheim,” said= Babbel with one victory and five defeats in the last nine games. “You have to wonder what is in the players’ heads. I will do all I can to get us out of this difficult situation. That is clear.”

Likewise, Weinzierl has just one win and five defeats in his last nine matches and badly needs a win over Freiburg.

Having dropped to fourth in the Bundesliga, Schalke 04 are looking to put a disastrous November behind them when they host Borussia Mönchengladbach after just one victory in the month’s five league matches.

The Royal Blues are waiting on the fitness of Greek defender Kyriakos Papadopoulos after the 20-year injured his knee in training on Thursday.

With five wins in their last six league games, Bayer Leverkusen host Nuremberg, 13th, having pulled themselves up to second in the league.

“We will not flip out just because we are now second,” said Leverkusen’s director of sport Rudi Völler in the wake of Wednesday’s 4-1 win at Werder Bremen. “But we know that we are currently doing a few things very well.”