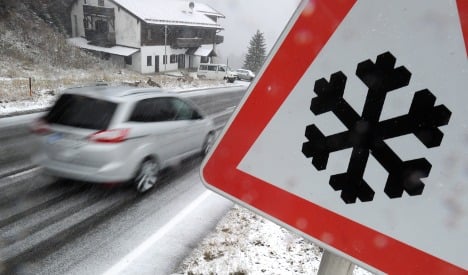 Snow and slush caused traffic chaos in Bavaria and Baden-Wüttemberg, according to the police, as many drivers battled with the sudden onset of winter. In the worst incident, a 38-year old driver was killed when his car came off the A7 road near Hopferau in Bavaria in icy conditions.

Severe weather warning was issued for Saxony and Thuringia after heavy snow fell overnight in higher regions of the Ore Mountains and Thuringia Forest, leaving a covering of between 13 and 15cm, said the DWD in Leipzig.

The rest of the country is also gearing up for winter as the snowfall spells the end of this year’s unusually mild autumn. A cold front is due to spread across the nation from the south during the day, said DWD, with Bavaria most at risk of snow on Thursday as morning rain turns icy as the day wears on.

Click here to see a gallery of the snowy onslaught

DWD forecasted temperatures will drop down to zero in most of the country on Thursday night and has forecast 5cm of snow overnight for lower lying areas and up to 30cm in areas above 400 metres.

Meanwhile, heavy rain is forecast for central, north and west Germany, meaning many streets will stay free of ice on Thursday, although some areas may see sleet showers, according to DWD meterologists.

“It isn’t a great Siberian or north Scandinavian cold (front) but it is enough to give some car drivers cause for concern,” a DWD meterologist told Süddeutsche Zeitung on Thursday.

Drivers are scrabbling to fit their snow tyres – a legal requirement for driving in ice, snow or slush – ahead of the weekend, when the likelihood of snow in higher regions is due to rise.

Anyone caught obstructing traffic with inappropriate tyres during the difficult winter season faces an €80 fine and receiving a point on their driver’s licence.

The bad news for drivers is good news for winter sports fans, however. The snow will be enough to open one or two ski slopes, DWD told the paper. The mild Autumn has delayed the start of the skiing season in many areas of the alps due to a lack of snow.