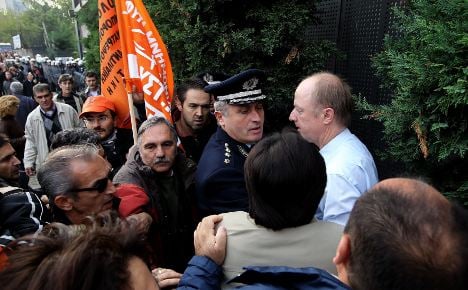 The three men were cleared after witnesses were unable to confirm their involvement in the incident, a judicial source in Thessaloniki told AFP. The three were charged with unlawful violence, disturbing the peace and attempted grievous bodily harm.

They were arrested after protesters on November 15 flung water and coffee at consul Wolfgang Hoelscher-Obermaier and tried to kick and punch him on the sidelines of a conference on Greek-German trade initiatives in Thessaloniki.

The protest was in response to layoffs in the civil service and comments by Germany’s deputy labour minister Hans-Joachim Fuchtel.

A day earlier Fuchtel said studies showed 3,000 employees were required in Greece for local administration work carried out by 1,000 people in Germany.

Fuchtel is a personal envoy of German Chancellor Angela Merkel and responsible for streamlining the operation of Greek local councils in collaboration with local officials.

Under pressure from its EU, International Monetary Fund and European Central Bank creditors, Greece recently voted a new round of painful austerity measures that have caused great discontent.

When Merkel visited Athens in October, around 30,000 people protested in the streets of the Greek capital.