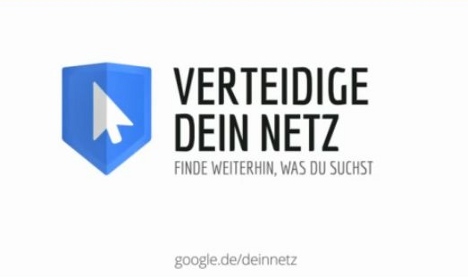 In the biggest lobbying effort to change a bill ever undertaken by the company in Germany, Google is warning on its German site that ancillary copyright (Leistungsschutzrecht) threatens web users’ access to information.

“Searching and finding − a fundamental function of the internet − would be distorted by ancillary copyright.”

Chancellor Angela Merkel’s centre-right coalition has proposed implementing a Leistungsschutzrecht law to ensure press publishers are fairly compensated for their content, for example, when a short summary of a news article appears on search engines or news aggregators.

But critics say the law would merely amount to a “Google Tax” to support beleaguered publishers unable to cope with the disruptive nature of the internet.

The Google campaign is an attempt influence the public debate ahead of the bill’s first reading in parliament this Thursday. Along with a special page at www.google.de/campaigns/deinnetz/, Google has put the issue on its main German search page and YouTube.

The web giant has even created an “MP Map” with public contact information for German parliamentarians, so opponents of the Leistungsschutzrecht bill can contact their local representative.

“We ask internet users to fight for the ability to find what they search for in the future,” said Tweraser. “We hope the German Bundestag will reject this draft legislation.”

But Peter Beyer, an MP from Merkel’s conservative Christian Democrats, attacked the initiative.

“I find this gigantic effort by Google completely overdone,” he told the WAZ newspaper group. “Google has an immense economic power that it is uses for this campaign.”

The lobby effort marks a new approach in Google’s battle to win hearts and minds in Germany, where the company has often run into public and official opposition to some of its core offerings.

Whereas hundreds of thousands of Germans opted to have their residences blurred on Google’s Street View mapping service, a row with Germany’s musical royalties authority GEMA keeps German users from seeing countless videos on YouTube – which is owned by Google.