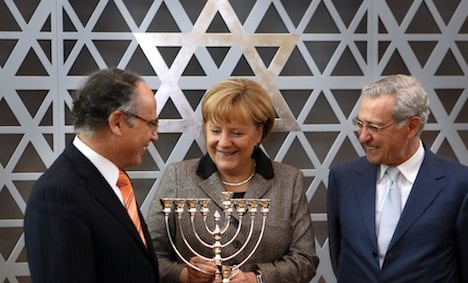 “The respecting of religious ritual is a fundamental good,” she told the annual gathering of the Central Council of Jews in Germany in the western city of Frankfurt on Sunday.

“I am delighted… that there is a lively Jewish community in Germany,” added the chancellor.

In a ruling published in June, a court in the western city of Cologne judged the rite to be tantamount to grievous bodily harm, prompting international outrage and calls for more legal clarity.

The ruling united Jewish and Muslim groups in opposition and German diplomats admitted privately that it had proved “disastrous” for Germany’s international image, particularly in light of its Nazi past.

Merkel was reported to have cautioned that Germany risked becoming a “laughing stock” if circumcision were banned in the country.

Last month, her cabinet passed a draft law to permit circumcision and clarify the legal situation. Merkel said she believed it to be a “balanced text.”

“I hope it can be agreed in the Bundestag before Christmas,” she added, referring to the German lower house of parliament.

The new bill stipulated certain provisos for a boy to be circumcised. Among these conditions, the draft law said the practice must be carried out “professionally” and “with the most effective pain relief.”

An exception must also be made in individual cases if there are health risks, for example if the infant is suspected of being a haemophiliac.

The head of the central committee for Jews in Germany, Dieter Graumann, thanked Merkel for her assistance in what he described as “difficult times.”

“It is important that German politicians acted and came up with legislation that we can live with,” Graumann said. “This visit has done us good in a time that is difficult for us,” he added.

Merkel also used the visit to reiterate Berlin’s support of Israel following eight days of violence in and around Gaza, which left 166 Palestinians and six Israelis dead.

“Every country has the right to defend itself. This is not only the right but also the duty of every government,” said Merkel.