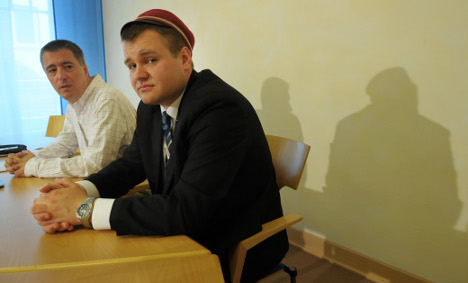 “There are two different positions towards the state in the German Burschenschaft,” said Schmidt. “The first wants to work from within society. The second see themselves as being in conflict with society.”

Approximately 1,500 of the 10,000 members are thought to align themselves with various degrees of extremist nationalism. Burschenschaft customs including wearing cadet-style uniforms, carrying fencing rapiers and taking part in torch-lit parades.

Loyalty and obedience are considered paramount, but with the growth of far-right sentiment in the leadership over the past years, a group of fraternities has chosen to break rank, culminating in this weekend’s vote.

Frustrated with the growing presence of extremism in the society, the liberal wing had moved to get membership of undemocratic organizations recognized as being against fraternity work at the meeting this weekend.

However, a majority of the 500 delegate members present voted only to ban membership of specifically “national socialist” organisations, meaning that fraternity members can continue to belong to other right-wing extremist societies recognized by the state as working against democracy, the magazine reported.

Schmidt said he believed the decision is likely to result in a further exodus over the coming months of liberal branches from the umbrella organisation that runs most of the Burschenschaft fraternities in Germany, the Dachverband der Deutschen Burschenschaft (DB).

Exit frees a fraternity from pressure applied by the ruling body to adopt, for example, a race-based entrance policy for new members.

Schmidt said the organization would not split down the middle, as the wing which has been fighting stamp out extremism and turn the fraternity movement into something modern and more liberal represented only a minority of around 20 percent of members.