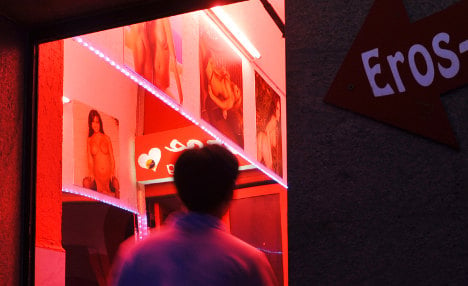 Amberg in Bavaria has the country’s highest concentration of brothels, with 60 bordellos in a city of just 43,500 inhabitants, wrote the Süddeutsche Zeitung on Friday.

And business is booming, according to solicitor Bernhard Mitko, who told the paper the number of prostitutes in Amberg is up 50 percent in the past 18 months. Now, in an attempt to clean up the city’s image, local authorities now want to banish the city’s sex workers, or at the very least impose a restricted area.

Florian Fuchs, head of the local Social Democrats (SPD), is sick of Amberg’s reputation as “number one brothel spot” in the region and, with the support of the City Council, is pushing for a total ban, wrote the paper.

The move comes after several residents complained of drunken customers ringing the wrong door bell late at night, houses losing value due to their proximity to the brothels, or even of being disturbed by loud noises coming through open windows in summer.

But an outright ban may be difficult to impose, particularly as the police have no such complaints and told the paper that Amberg’s prostitutes are well-behaved and discrete. They have also raised concerns that criminalising the sex industry and driving it underground will cause more problems than it solves, wrote the paper.

“It’s an illusion to believe that prostitution will disappear if it’s banned,” Bärbel Ahlborn, head of the Kassandra advice centre for prostitutes in nearby Nuremberg told the paper.

But the Amberg City Council are hoping a ban would force the industry to move on to Regensburg or Nuremberg.

Amberg Mayor Wolfgang Dandorfer, who says his priority is protecting children, has suggested setting up a restricted area around schools, nurseries and religious buildings, or at very least in the old town, as a compromise measure should a ban be rejected.

Prostitution is banned in German cities and towns with fewer than 30,000 inhabitants, whereas in places with a population of between 30,000 and 50,000 it is left up to local authorities to put restricted areas in place.