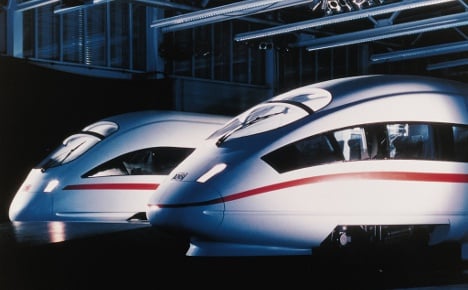 Deutsche Bahn was “very annoyed and disappointed” with Siemens, a spokesman said, as he admitted 16 new ICE 3 trains – which have been on order for over a year – would not be ready for the winter as promised, the Tagesspiegel newspaper reported on Friday.

The state-owned rail company warned travellers they would face cancellations and delays without the trains, needed to beef up the reserve fleet, vital for when ice or snow threaten the smooth running of long-distance rail service.

“Our customers feel as if they’ve been left in the lurch by Siemens,” Berthold Huber, head of Deutsche Bahn’s long distance travel department told the paper, adding that the rail company desperately needed the trains.

Deutsche Bahn has been waiting for the additional Velaro D ICE series 3 – needed to form a winter reserve for the current fleet of 253 trains – since December 2011, when the first machines had been due to arrive.

This winter may now see a repeat of the frequent delays and cancellations to the ICE service two years ago as a result of extreme cold and heavy snowfall, wrote the paper.

“We’re really, really sorry,” a Siemens spokesman told the paper, after explaining that software problems were responsible for the latest in a string of delays.

Siemens did not give a new delivery date, but said that the software problems would take time to iron out. “It won’t be days or weeks,” Siemens Chief Technology Officer Volker Kefer told the paper.