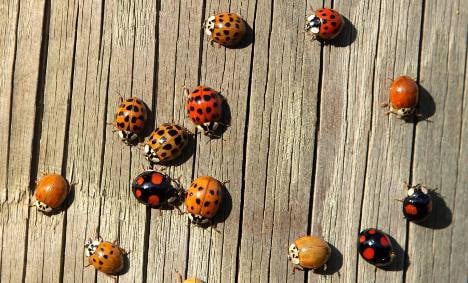 Professor Andreas Vilcinskas from Gießen university has been analysing the Asian ladybird’s chemical biology, searching for drugs with the potential to be useful in human medicine.

Vilcinskas and his team copied one molecule, harmonine, the chemical which makes Asian ladybirds taste bitter to predators – and found it reacted well against TB and malaria.

He told The Local how people had introduced the Asian ladybird to countries around the world because of its rapacious appetite for aphids, but that they had turned into invaders, proliferating faster than native species, and dominating in many countries.

The team found 50 antimicrobial peptides – small proteins – in the ladybirds – more than has been seen in any other animal.

“Such diversity and number is not seen in other animals – insects or otherwise,” he said. “I am on a number of genome consortia and have never seen such a diversity of antimicrobial peptides.”

The team found the strongest proteins were effective against bacteria and fungi which are often deadly to other species of ladybirds – likely a significant factor in why the Asian species has thrived across the globe.

Asian ladybirds are particularly dominant over native species in urban and agricultural environments, said Vilcinskas. Although there are around 80 different native species, the Asian variety is the most commonly seen, he added.

“The native varieties will become more endangered,” he said, although he would not go so far as to suggest they could be wiped out by the dominant Asian species.

Next, attention will fall on the chemical properties of the Asian ladybird’s successful defence recipes. More work needs to be done on harmonine to reduce its toxicity.

“Then it could become a new drug for microbacterial TB and malaria,” he said.