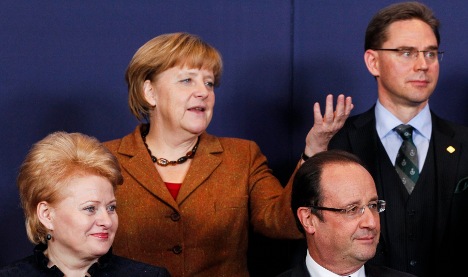 “I think we’re advancing a bit, but I doubt that we will reach a deal,” Merkel said as leaders left after a first session of talks, that were suspended until Friday.

Earlier, French President Francois Hollande arrived Thursday in Brussels for tough talks on the European Union’s next budget saying he sought compromise, not an ultimatum.

“I have come to seek a compromise not to set an ultimatum,” said Hollande, adding that “Europe is a compromise” and that no country “can come seeking what it spent, otherwise there is no more Europe.”

“Each one of us will doubtless have to show a spirit of compromise,” said Merkel, adding that it was however “possible we will need a new stage” before clinching a deal.

“We all know each other well, but I repeat that perhaps we will need a second stage” of talks.

A number of countries led by Britain are seeking huge cuts in the trillion-euro EU budget for 2014-2020 to match austerity programmes at home, and Hollande’s government has rejected proposals to cut spending on the Common Agricultural Policy, the largest item on the budget.

Though France is a leading recipient of farming subisides, Hollande denied he was purely defending national interests.

“Europe needs to master its budget because these are times when every euro counts,” Hollande told reporters.

But the next long-term EU budget needed “to privilege growth,” he said.