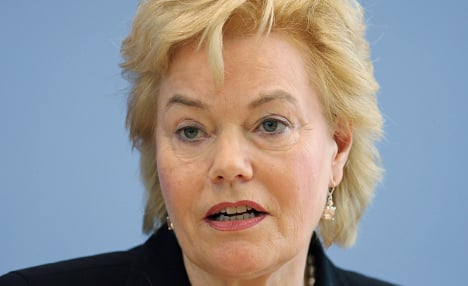 Head of the Federation of Expellees (BdV) Erika Steinbach said she was “not surprised” at revelations that eight of the 13 members on the federation’s first committee were former Nazi party members, and a further three had been close supporters of the regime, the Süddeutsche Zeitung newspaper said on Thursday.

Several of the federation’s early leaders had even been members of the SS, according to the study by the German Institute for Contemporary History in Munich.

In at least one case, the authors believed it “very probable” that a committee member had been involved in the mass murder of Jews on the eastern front, the Frankfurter Allgemeine Zeitung newspaper said on Monday.

These admissions stand in stark contrast to a 2010 version of the study which played down the connections between the organisation and the Nazi party, said the Süddeutsche Zeitung newspaper.

The revelations in themselves are not shocking, said Steinbach in a BdV press release. The Nazi pasts of early BdV founders would only surprise those who believed what she called the West German official state myth that government institutions had undergone a radical cleansing process after 1945, she argued.

It is widely known, for example, that former Nazis such as Hans Globke were employed in the first West German administration under Chancellor Konrad Adenauer.

Even in East Germany, where de-nazification was supposedly pursued with fervour, 25 percent of the ruling Socialist Unity Party (SED) were former members of the Nazi party in 1949, said Steinbach.

In addition, many heroes of the post-war cultural Germany such as Günter Grass or Walter Jens have had to “live with their not-so-flawless CVs since then,” wrote Steinbach.

According to study author German historian Michael Schwartz, who helped investigate the backgrounds of the 1958 BdV committee members, 84 percent had openly supported the Nazis.

This proportion, he told broadcaster Deutschlandfunk on Wednesday, was “far above average” when compared to other West German post-war institutions.

Many of the expellees had been Nazi colonizers who volunteered to settle in regions acquired by the Third Reich in the late 1930s and invaded during the Second World War.

In the chaos of 1945, the settlers were driven out of the then mainly German-speaking Sudetenland – acquired by Nazi Germany in 1938 – on the German-Czechoslovakian border, along with ethnic Germans who had been living there for generations.

Settlers were also forced out of the now Polish regions of Silesia, East Prussia and Pomerania.

Having lost their belongings, homes and territory, in the post-war period the expellees insisted on presenting themselves as victims, a view frowned upon by the Western Allies.

Lobbying for the recognition of the expellees’ suffering in the late 1950s and 1960s, the BdV called for compensation, an end to the policy of de-nazification and for the return of German territory lost in 1945, wrote the Süddeutsche Zeitung.

Still a powerful lobbying group today, the BdV continues to campaign for a controversial memorial foundation for those expelled after the war.