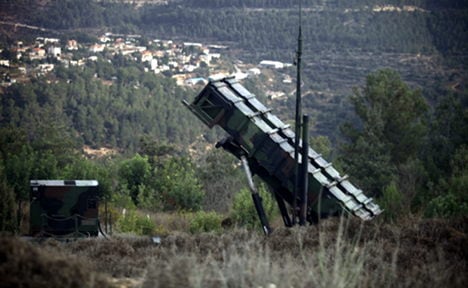 He was addressing the lower Bundestag house of parliament shortly after NATO announced it had received a request from member Turkey for a deployment of Patriot missiles to protect its troubled border with Syria.

Germany and The Netherlands are the two main European nations that possess the medium-range missiles made by US group Raytheon.

The German government would “prepare a mandate as quickly as possible and present it to the Bundestag,” de Maizière said, calling on lawmakers to discuss it December 10-14 at the latest.

He stressed the defensive nature of Turkey’s request and dismissed fears the Patriot missiles could serve as protection for a no-fly zone in Syria or as part of an offensive operation as “baseless”.

“We are determined to answer the request positively,” de Maizière said.

The operation would involve sending up to 200 German soldiers.

Originally used as an anti-aircraft missile, Patriots today are used to defend airspace by detecting and destroying incoming missiles and were made famous during the 1991 Gulf War as a defence from Scuds fired on Israel and Saudi Arabia from Saddam Hussein’s Iraq.

The German minister was also critical of Turkish Prime Minister Recep Tayyip Erdogan, who on Tuesday accused Israel of “ethnic cleansing” in Gaza.

De Maizière said that an alliance partner who was now receiving help could also be publicly condemned “and this is what I am doing.”

Earlier German Foreign Minister Guido Westerwelle said that initial indications showed “the criteria which we have set are fulfilled” over Turkey’s request to NATO for help.

He said it would be a mistake to deny support to a NATO member under attack.

According to a YouGov poll, 58 percent of Germans said they rejected any German deployment over the conflict in Syria, compared to 31 percent who said they supported it.