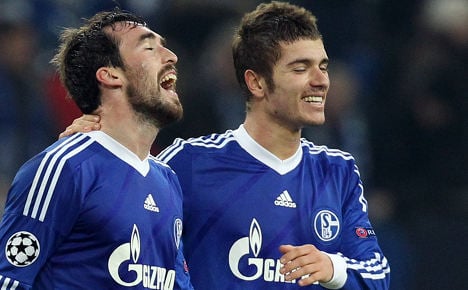 While Arsenal threatened to usurp Schalke as Group B leaders with a 2-0 win in London over Montpellier, Austria left-back Fuchs struck with a thunderbolt of a goal just 13 minutes from time to keep the Royal Blues top of the table.

Victory puts Schalke into the knock-out phase, but they will need to beat Montpellier away in a fortnight to be sure of finishing as group winners as they join fellow German teams Dortmund and Bayern Munich in the last 16.

“When you reach the knock-out stage before the last group game, you have to be satisfied,” said Schalke’s Dutch coach Huub Stevens.

“We can’t really be happy with the way we played, but for the club it was vital to reach the knock-out phase for financial reasons.

“I wouldn’t mind if we go on to win the group.”

Schalke deserved the win having battered the Olympiakos goal with 27 attempts, 17 on target, compared to the Greeks’ six shots as the visitors’ goalkeeper Roy Carroll had a busy night.

“We played a solid game, but in the second we didn’t start that well and they created dangerous opportunities,” said Olympiakos coach Leonardo Jardim.

“We failed in our objective of reaching the knock-out phase, but at least we are in the Europa League now.”

Olympiakos came to Germany in buoyant mood with seven wins in an eight-game unbeaten run, but they had no answers at the Veltins Arena.

“It was tough work today but we deserved to win as we clearly dominated the opposition,” said Schalke captain Benedikt Höwedes. “We had a few opportunities and fortunately we managed to score one of them.”

Schalke had the best early chance when Fuchs looped his free-kick over the wall, but Olympiakos goalkeeper Carroll threw himself to his left to push the ball out for a corner on 24 minutes.

Draxler fired over just before half-time, while Olympiakos’ best chance came with half an hour gone when Djamel Abdoun failed to use the four-on-two situation and his pass flew over the head of Giannis Maniatis.

Schalke kept up the pace in the second-half with both midfielders Jermaine Jones, Lewis Holtby and defender Kyriakos Papadopoulos going close against his compatriots.

The winning goal came on 77 minutes when Jermaine Jones passed across to Fuchs, who claimed his first Champions League goal with a long-range strike.

He powered onto the ball and drove it across the face of the Olympiakos goal from 35 metres out to give Carroll no chance as the Greeks left Germany empty-handed.