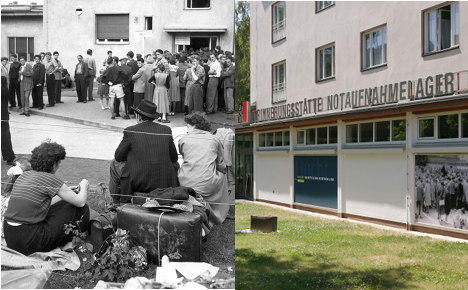 Then and now, the Marienfelde camp. Photo: DPA and EMM

The Marienfelde refugee centre, a sprawling concrete complex in the suburban south of the city, has been housing those fleeing to safety since 1953 – and looks it. Walking through on a quiet Wednesday morning, it was easy to imagine being there during the Cold War.

People were always leaving East Germany – in floods during the 1950s, and trickles later when it became more difficult. By the time the Berlin Wall came down and the country was reunited, around four million are thought to have left the East.

Marienfelde was a stop-over home for around 1.35 million of them over the decades. At its busiest point in the mid-1950s there were 1,200 people living there, generally five to a room, sleeping in bunk-beds.

Standards are better now – only around 600 people are supposed to be housed there, although in November there were more than 700 people staying, said director Uta Sternal.

“It’s okay at the moment but we really cannot take any more people in,” she said, adding that over half of those living there were children. Some can be seen through from her office windows, playing football.

Marienfelde has private kitchens and bathrooms and is thus considered one of the better places for a person seeking asylum in Germany. But life is still tough, said Sternal.

‘They have left everything behind’

“They have a little money, aren’t going to get murdered and have heating – but then again they have left everything behind,” she said.

For those who have landed a room at this, one of Germany’s better refugee camps, life for involves a lot of patiently doing very little – by law refugees cannot work until they are granted residence. They receive a basic allowance which is the same as the lowest level of state welfare. Many of the facilities which house them do not offer German lessons, although Marienfelde does.

Just 10 percent of people who pass through the complex end up securing a life in Germany. “The rest appeal their rejection, go to another country or return home,” said Sternal.

Nationwide 43,362 people applied for asylum in Germany in 2011. Just 652 were accepted, and 33,687 were rejected, according to statistics from the federal office for migration and refugees (BAMF).

A quarter of applications are thought to be turned down without even being examined by the authorities, according to the exhibition that has opened at the small museum at the Marienfelde complex.

It says that at least 4,300 people are in Berlin at various stages of the asylum process – yet technically the city only has room to house 4,120.

Although they and their families are living in the same squat, sparse buildings as their East German predecessors, the problems faced by people who have fled Afghanistan, Iraq or Syria, are significantly different.

‘Skin colour and language are barriers’

“Refugees coming from the GDR could speak German and they were mostly Caucasian, meaning they were less noticeable than current immigrants,” said Sternal. Skin colour and language, she said, present considerable barriers for a refugee in 2012.

The museum primarily covers what life was like for refugees during the Cold War, complete with a recreated dorm room decked out in 1950s furniture. Black and white photos of the outside look as if they could have been taken yesterday.

But it is the new temporary exhibition which takes the focus away from the past and towards today.

Click here to see pictures taken around the Marienfelde centre

Museum curator Kathrin Steinhausen worked with four groups of refugees currently living at the centre to create the exhibition which tells their stories. They are being shown for three months at a time – the first features a Chechen family of six.

Usman Gedaev and Luisa Muslimova and their four children aged between 11 and 19, came to Germany last October after war tore apart their country. The government has given them leave to stay until April 2013 and with legal help offered at Marienfelde, they are trying to get their permit extended.

A video installation shows an interview with them in which they talk about what they do each day and their previous lives in Chechnya.

“It is hard to sit and do nothing everyday,” says Muslimova, who used to sell vegetables at a local market. Her partner, Gedaev, explains how each week since they arrived he has been taking their children aside to ask them how they were feeling and whether they want to leave.

The family are filmed in their shared bedroom, where they demonstrate a traditional dance for the cameras.

“There are preconceptions when it comes to refugees in Germany,” said Steinhausen. “Lots of Germans seem to think that they can just arrive and stay but we are trying to show it isn’t as easy as that.”

‘GDR and modern refugees both wanted a safer, better life’

For Steinhausen, the project goes further beyond showing what living in a refugee camp is like. She hopes that by putting the past and present side by side, visitors would notice the similarity between the two.

“Marienfelde is a historical place with contemporary importance,” she said, standing next to a photo taken in the early 1950s of hundreds of East German refugees queuing outside the entrance, all hoping for a place to stay.

“Questions raised when the GDR refugees are the same as many being asked today,” Steinhausen explained, adding that looking to the past to solve current problems could be helpful, especially when it came down to who would or would not be classed as an asylum seeker.

Both Steinhausen and Sternal were clear on one point in particular, that “refugees want the same thing as they did in the Cold War – escape from war and a safer, better life.”

A group of refugees are currently pushing for the government to acknowledge the often squalid conditions refugees are made to live in while applying for asylum.

Several hundred left refugee centres in Bavaria in September and walked to Berlin where they have been camping out and demonstrating since – thus far with little political reaction.

“It would be nice if things were to change and what they [the protesters] are doing is a prod at the government,” said Sternal. “But any actual changes would take a long time,” she added.

The Marienfelde Refugee Center Museum, which is one of the few in Berlin with no entrance fee, will be showing the “After the escape. Life in the residential home Marienfelder Allee” until July 2013.