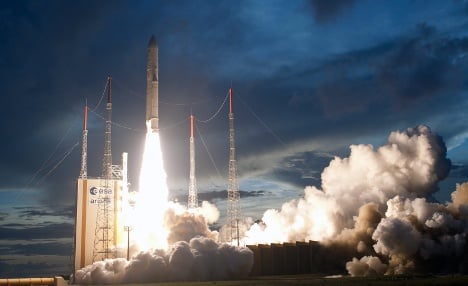 The German-backed plan for an Ariane 5 ME will go ahead, with a first flight scheduled for 2017, and as much of its technology as possible will be used in a future Ariane 6, a launcher promoted by France, whose maiden mission would be in 2021-2022, said French Science Minister Genevieve Fioraso.

“We have established a joint document with our German partners, which naturally is extended to our other partners in Ariane,” she told journalists at a budget meeting of the European Space Agency (ESA).

The two-day talks, which began on Tuesday, had been overshadowed by discord over a replacement for the ageing but reliable Ariane 5.

The new rocket should provide more flexible launch options for the swiftly-changing satellite market and wean itself off the €120 million a year that the Ariane 5 needs from ESA’s budget each year.

France had been pushing for a smaller, sleeker Ariane 6, which would require investment of about €4 billion.

But industrialists feared the timescale for this was way too long and would give the advantage to nimble rivals in commercial satellite launches.

They preferred a German-backed option, an Ariane 5 ME (for “Midlife Evolution”), which would be ready by 2017 at a putative cost of €2 billion.