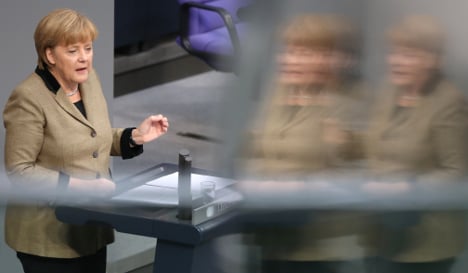 In a wide-ranging speech on Germany’s budget in the Bundestag lower house of parliament, Merkel said there was “a chance there will be a solution on Monday” for debt-wracked Greece after a Eurogroup meeting collapsed overnight.

But she reiterated there would not be “one action, one solution in one fell swoop, one truth” to overcome the three-year crisis that has brought the 17-nation eurozone to the brink of being torn apart.

“It is a process and what has been done over years and decades cannot be resolved overnight and therefore we will continue to proceed step by step,” added the chancellor.

With less than a year until elections in Europe’s top economy, her Social Democratic rival for chancellor, Peer Steinbrück, once finance minister in a coalition under Merkel, lashed out at her efforts to put out the eurozone’s fires.

“Tell it how it is,” he said, to cheers from his supporters, urging her to admit that saving Greece would require German taxpayers to make greater sacrifices and incur more costs.

“Your dance of the seven veils [was] to the tune of ‘not a cent for the Greeks’ [in 2010],” he said, adding that it had now changed to “‘there’ll be no additional money for Athens'”.

But he warned: “The moment of truth is here. There must finally be … concrete relief for Greece’s state debt.”

“The finance gap cannot be closed. We have long been in a liability union. Tell this finally to the German taxpayers,” Steinbrück said in an animated address.

Merkel hit back, saying that the proposals for Greece’s economy would set the embattled country back on the road to growth.

“If you read the 500 pages that we sent you on reforms in Greece, then you will know that it’s not just about savings,” she stressed.

“It is about savings – especially in the public sector – but it is also about a necessary and deep restructuring of the Greek state so that in the long run the Greek people can live again in prosperity and shape their own future,” she added.

Eurozone finance ministers failed at an emergency meeting Wednesday to strike a deal to unblock bailout funds needed to keep Greece from bankruptcy and said they would try again on Monday.

A day earlier, they had expressed confidence that a deal would be reached to release €31.2 billion in aid to Greece and resolve a rift with the IMF over how to get the debt-stricken state’s economy back on track.

But the talks ended nearly 12 hours later, in the small hours of Wednesday morning, without the desired result.

By the end of the year, Athens is also due to receive two more aid payments, worth €5.0 billion and €8.3 billion, in exchange for which it has pledged to implement a series of unpopular austerity budget measures.

Under the current bailout, private sector creditors agreed to write off €100 billion of Greek debt, and it has been suggested that official creditors should now do the same – an option the EU and the ECB have ruled out.

The ECB meanwhile cannot accept a write-down because doing so would mean in effect that it was giving a government direct financing, which its rules forbid.

Under its bailout terms, Greece was supposed to reduce its public deficit – the shortfall between government revenue and spending – to the EU limit of 3.0 percent of GDP by 2014, but last week a delay to 2016 was agreed.