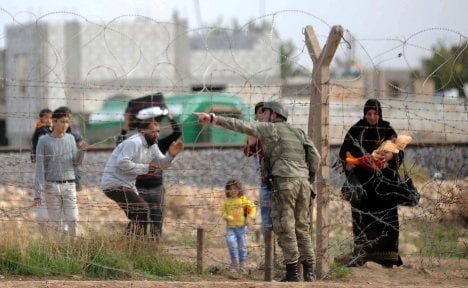 Turkey is expected to officially ask for NATO support to defend its border with Syria, after rocket attacks associated with the Syrian civil war killed five Turkish civilians.

Hundreds of thousands of Syrian refugees have crossed the border to escape the fighting, stretching Turkish facilities to the limit. And last week NATO Secretary General Anders Fogh Rasmussen said the alliance was prepared to assist Turkey in case the Syrian conflict encroached on its borders.

A report at the weekend suggested that Germany was prepared to contribute 170 troops along with two batteries of Patriot air defence missiles, as part of a NATO support force.

German Defence Minister Thomas de Maizière said on Monday he was expecting the request before the end of the day, and would be minded to agree.

Germany, he said, had been “the main benefactor of the alliance’s solidarity.” He added that if, “now, an alliance partner asks us for such a thing, it is clear to us that we would regard that openly and with solidarity.”

But Social Democratic (SPD) parliamentary party leader Frank-Walter Steinmeier said on Monday that he would demand a parliamentary vote for any deployment. The Green Party said it would want to see a United Nations mandate before any troops were sent there.

Thomas Oppermann, the SPD parliamentary party manager said it was not clear that Turkey’s borders were actually under threat, which would activate NATO mutual defence promises.

“I do not see that yet,” he told public broadcaster ARD’s Morgenmagazin news show on Monday. He also warned of what he called a “hooray mentality”, and said that international legal security such as a UN mandate might also be necessary. “This is about an act of war,” he said.

Green security expert Omid Nouripour told the Leipziger Volkszeitung newspaper he wanted to see parliament take as many measures as possible to prevent Germany sliding into an illegal war in Syria.

He said that having refused to help in the Libyan conflict, Germany did not have the international credit left to refuse to take part in the Turkey-Syrian crisis. And he said the Patriot missiles might well be poorly suited to the border, saying that Syrian attacks had largely been with mortars, against which the missiles would not work.

He said the Patriots were offensive rather than defensive weapons, and would in the worst case, “very quickly make Germany party to war.”