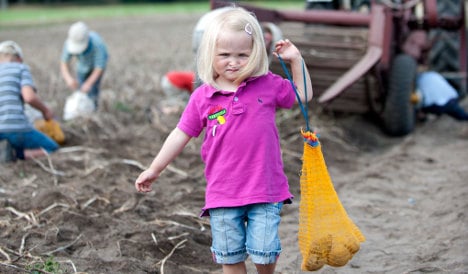 On a vast farm in former Communist East Germany, payments from the EU’s Common Agricultural Policy are seen as a necessary evil to keep the wolf from the door but cause huge administrative headaches.

“It’s a lot of bureaucracy and a lot of effort to file these demands every year,” complains Hans-Dieter Gabel, buried under paperwork in his office on the farm in Mecklenburg-Western Pomerania in north-eastern Germany.

“I’m very critical” of the CAP, said Gabel, president of the enormous Torney agricultural collective, a hangover from Communist times, where he has toiled for more than 30 years.

Despite receiving some €500,000 per year from the policy, he said he would “rather have no money from Brussels,” which he sees as sprawling and out-of-touch administration 900 kilometres away.

“It’s a radical idea but then we would have no obligations and no control over us,” the 56-year-old farmer said.

Nevertheless, on a tour of the barn with 70 calves ready to be slaughtered, the cows grazing in the fields and the silos packed with barley, Gabel admits that the cash is “a safety net” for his firm and his staff.

The CAP, which will be one of the main battlegrounds at an EU summit later this week, was designed to enable farms to survive poor harvests, spikes in raw material costs or plunges in agricultural prices.

As Europe’s top economy, Germany gives most to the CAP – paying €8.7 billion annually into the pot – but it is also the third-largest recipient (behind France and Spain), with its farmers receiving €5.6 billion.

However, the difference of €3.1 billion makes Germany by far the biggest net contributor to the CAP pot, shelling out more than twice as much as Britain, one of the main opponents of the fund.

German Agriculture Minister Ilse Aigner has defended the CAP, saying it “provides financial means for the protection of the environment, animal welfare and consumer standards in Europe.”

“Everyone says that farmers are the winners from the CAP but it’s not true. The real winners are the consumers because without the CAP we could not produce goods so cheaply,” he said.

Agriculture in Germany continues to bear the hallmarks of its previous division, with small and mainly family-operated farms in the west and south, and enormous collectives in the east.

Gabel’s Torney collective, named after a brook that runs through the village of Pripsleben, is a perfect example, with 1,300 hectares of corn, rapeseed, barley, potatoes and beetroot, plus 300 hectares of pasture.

In addition, Gabel farms hundreds of cows, calves and pigs for meat, sold locally throughout the state of Mecklenburg-Western Pomerania in the form of salamis, hams and cutlets.

After what promises to be long and painful negotiations on the budget in Brussels, Gabel’s half-million-euro annual support is likely to be slashed, said Frank Offermann, an agricultural expert from Germany’s Thünen Institute.

While some EU countries want the budget slashed, others want the funds redistributed. “In either case, the transfers to German agriculture will diminish,” said Offermann.

But he is not without a more modern plan B. Rather than wrestling with the red tape needed for CAP handouts, he is busy renting out the roofs of his barns for solar panels and his fields for wind energy turbines.