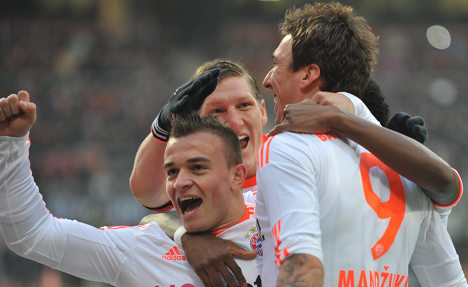 After second-placed rivals Schalke 04 suffered a 2-0 defeat at Bayer Leverkusen on Saturday evening, the Nuremberg draw only extended Bayern’s lead.

With Bayern facing a crucial Champions League clash at Spain’s Valencia for control of Group F on Tuesday, Heynckes accepted the draw.

“After taking the early lead, we failed to make it two or even three. Obviously, we conceded the equaliser at a psychologically bad moment.

“Because of the second-half, we have to accept only taking a point.” Bayern needed just three minutes to take the lead as Croatia striker Mandzukic pounced on a Toni Kroos pass.

Nuremberg got back on level terms when ex-Munich midfielder Markus Feulner, who spent six years at Bayern as a youth player, smashed in his long-range shot on 46 minutes past Bayern goalkeeper Manuel Neuer.

“It was a bit fortunate that the ball moved in the air the way it did,” said goal-scorer Feulner.

“At first, it looked as though it was headed for the centre of the goal, but then it curled. I’m sure that was a surprise for Manuel Neuer.”

The hosts were reduced to 10 men when midfielder Timo Gebhart was shown a second yellow card for elbowing Germany star Bastian Schweinsteiger in the face with 14 minutes left.

But Nuremberg hung on to claim a point which moved them up to 14th in the league.

“It was not easy,” admitted Schweinsteiger. “We had many good opportunities, but we didn’t put in the final pass or make the right decision.

“We should certainly have made it 2-0, then things would have been much calmer. Of course, we gave the goal away.”

Leverkusen later beat Schalke with an impressive display after goals either side of half-time following a wonderful strike by Andre Schürrle, then Stefan Kiessling.

“We have made things incredibly bad for ourselves,” admitted Schalke captain Benedikt Höwedes. “We made a lot of mistakes in our build-up play and we were punished mercilessly.

Eintracht Frankfurt stayed up with the league leaders in third by claiming a 4-2 win at bottom side Augsburg having taken an early 2-0 lead.

“It did us good to take an early lead, we ran more than in our last game and missed a chance to go 3-0 up,” said Eintracht coach Armin Veh.

“Augsburg never gave up. Their moral is intact. Overall, it was a good football match and we ultimately deserved to win,” he added.

“The first half was the more spectacular for both sides,” said Dortmund coach Jurgen Klopp.

“We knew they’d be strong if we let them move the ball around at their feet, but we took control of the game in the second-half.”