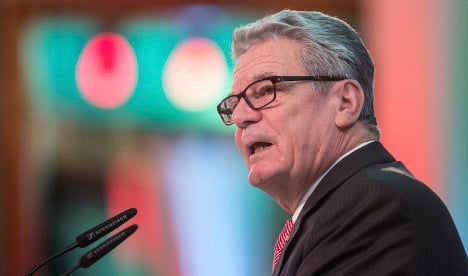 “One can stand in line at 5am for the newest product. Or one could spend all day in front of the shop protesting against inhumane work contracts,” Gauck said during an economics summit organised by the Süddeutsche Zeitung newspaper in Berlin on Thursday.

He called for lessons to be learned from the financial crisis, but complained that little had changed. “The uncontrolled growth in the financial sector has still today not been got rid of,” he said, adding that fundamental changes were needed and that risk must be reasonable.

Bankers should not, “take bonuses in good times, and then in difficult times.. call upon the tax-payer,” he said.

“The current knowledge that in an emergency they will be rescued, distorts how risk is regarded by the banks in a way that neither helps the market nor the wishes of the tax-payer,” he said.

“Numbers in the black are not reason enough to cross red lines,” he said.

And he said the 1990s demands for a small state had in many ways been a mistake. Rather, he suggested, the aim should be to create a state which was able and willing to deal with things.

The point was, to try to develop a responsible capitalism which looked further than the demands of business to include responsibility for social rules.

“Responsible capitalism is possible,” he said, adding that pushing for profits was not improper – but that greed for more at any price was dangerous.

Yet this sense of responsibility should also be an everyday measure for consumers too. “How long will Europeans continue to buy jeans for €10 although they know that the poorest of the poor in Asia or Latin America pay a high price, with their health or their human dignity?” he asked.