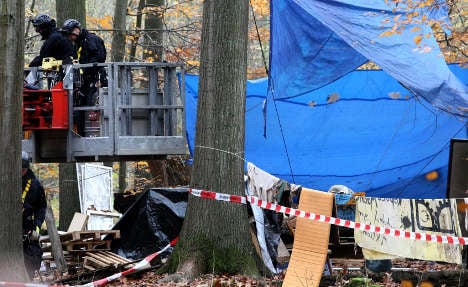 The man was the last protester still in place at the Hambach forest near Kerpen, North Rhine-Westphalia after a tree-house camp was cleared last week to enable the forest to be felled and the area strip-mined for brown coal.

The man, said to be a 27-year-old called Jonas from southern Germany, had refused to come out of the tunnel, but was pulled out shortly before midnight on Friday, the Kölner Stadt-Anzeiger newspaper reported on Saturday.

He was taken to hospital for checks, but did not seem to be injured, the paper said.

Protesters had kept a vigil nearby, while locals had brought them hot drinks and food. Police and fire brigade specialists had tried to reach the man through the tunnel, but it was too narrow to bring him out and they were concerned that it might collapse.

They then started to dig their own access tunnel to reach him – while trying to talk him into coming out voluntarily. At one point they got close, but he kicked away a number of wooden props and fled further into the tunnel.

On Friday night the Kölner Stadt-Anzeiger said a rescue team that had gone down the access tunnel and widened the tunnel leading to his hide-out, grabbed him and brought him out.

“I am a little baffled by the great interest shown in the fact that the police are risking my life to clear this area,” the man had said while still in the tunnel, the paper reported.

“At the same time no-one seems to be interested that the resources of millions are being destroyed: hundreds die each day of hunger, thirst and exile as a direct consequence of man-made climate change.”

The paper said the Hambach Forest had once been the largest of the region, covering more than 5,000 hectares, with a history dating back 12,000 years. It was full of oak and hornbeam trees.

Much of the forest is gone, felled to make way for open cast, or strip-mining. This is the method where rather than coal being dug out of tunnels, the land is simply dug up and the brown coal taken from it.

Protesters have been occupying the area since April in a bid to stop, delay or at least draw attention to the strip-mining operation due to be carried out there by energy company RWE.