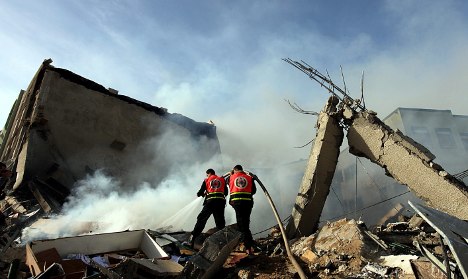 “The federal chancellor calls on the Egyptian government to use its influence on Hamas to push it towards a moderation of the violence,” Merkel’s deputy spokesman Georg Streiter told a regular government news conference.

Streiter added that Merkel was following the escalation of the unrest in the Middle East “with great concern” and stressed: “It is Hamas in Gaza that is responsible for the outbreak of the violence.”

“There is no justification for firing rockets on Israel which are causing massive suffering to the Israeli population,” Streiter added.

Merkel – in Moscow on Friday – wants an “immediate” stop to the rocket fire, the official said.

“The Israeli government has the right and the duty to protect its population in an appropriate way.”

The spokesman declined to comment however on whether Berlin would back a ground offensive in the Gaza Strip.

On a visit Friday to the Hamas-run enclave, Qandil vowed to intensify Cairo’s efforts to secure a truce and urged world leaders to end Israel’s “aggression” in Gaza.

The diplomatic mission came as Israeli officials said the Jewish state was preparing to launch its first ground offensive in four years into the Gaza Strip and the army started calling up 16,000 reservists.

Israel accused Hamas of violating the agreement but it denied carrying out any strikes.