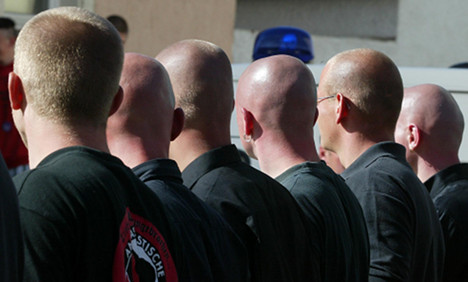 The pair, both 33, claimed to have been the target of 15 angry far-right extremists after taking down neo-Nazi stickers in the Saxon town of Hoyerswerda.

When they asked the police for help, officials said they could not guarantee the couple’s safety and advised them to leave town for a secret location, Die Welt said on Friday.

“It is easier to take two people and put them somewhere safe than it is to keep watch over 30 suspects, or install five police cars in front of a house,” a spokesman for the town police told broadcaster MDR.

Criticism came almost immediately from the state’s Green Party, which pointed out that the number of police officers in Hoyerswerda had been cut from 136 in 2009 to 104.

The fact that officers had not managed to gather information on suspected neo-Nazis was a scandal, said Eva Jähnigen, Saxon Green party domestic policy spokeswoman.

Ulbig did not comment on the job reductions, but he said it was the police’s responsibility to protect the people of Saxony, which “means that everyone should be able to live safely in their homes.”

Bernd Merbitz, police chief in the nearby city of Leipzig and co-ordinator for anti-far-right extremism operations, also criticised the officers for advising the couple to leave town, but said that he doubted there were enough officers to protect people from far-right violence.

Mayor of Hoyerswerda Stefan Skora did not directly acknowledge the police action but offered his sympathy to the couple concerned. He added that he expected a full investigation from the police into the suspects.