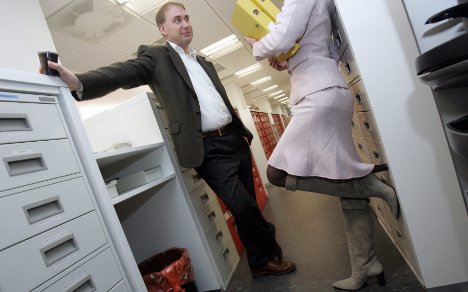 Rather than making men look out for a new woman, the hormone oxytocin, known for its importance in bonding between romantic partners, seemed to steer those already in a relationship away from a potential rival, the researchers found.

But not all men reacted the same way. “For the singles, there was no significant effect,” Dirk Scheele from the University of Bonn’s Department of Psychiatry, told The Local.

To put the powers of oxytocin to the test, the scientists turned to a good-looking woman for help. She may not have been a “top model,” Scheele said, but the men in the study rated her attractiveness level above 60 on a scale of 100.

A group of single guys and men in monogamous relationships were given a nasal spray of oxytocin and then put face-to-face with the foxy female, whom none of them had met before.

The study found that those men in relationships kept a “much greater distance” of about 10 to 15 centimetres from the woman than their single counterparts – much to the scientists’ surprise.

“We were expecting that oxytocin – because it enhances trust and curbs social anxiety – would make for less distance,” Scheele said.

The result was similar in a second experiment, which confronted the men with photographs of attractive women. Unlike the singles, the men in monogamous relationships approached those images more slowly.

Still, women hoping that drug companies will start marketing a cure for the male wandering eye are in for disappointment: Scheele told The Local that although oxytocin was a promising substance from a psychiatric standpoint, the idea of a “monogamy spray” made little sense.

Indeed, there are other ways that women can stimulate oxytocin in their male partners; Scheele said massages and positive conversations have also been shown to boost the body’s own stores of the hormone.