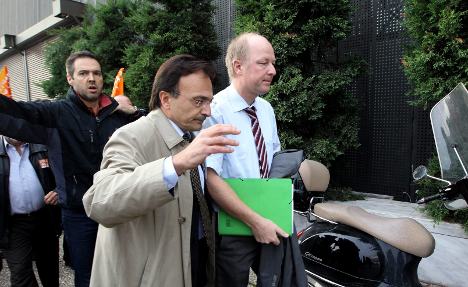 Consul Wolfgang Hoelscher-Obermaier was speaking at a conference on Greek-German trade initiatives, police said, when he was heckled and targeted.

Hoelscher-Obermaier later said he had lost his glasses in the fracas. “Stand united to kick out the Nazis,” some protesters chanted as loudspeakers erected by protest organisers blared a Nazi military marching song.

Other members of the German delegation were pelted with eggs by the group that numbered around 300 people, according to police.

Officers moved in to extricate the consul from the crowd, but they made no arrests and nobody was injured in the incident, police said.

“Studies show that 3,000 employees are required in Greece for local administration work carried out by 1,000 people in Germany,” Fuchtel said.

Fuchtel is a personal envoy of German Chancellor Angela Merkel, tasked with working with Greek officials to streamline the operation of local councils.

On Thursday, the consul said there had been a “misunderstanding” over his comments.

“It was a misunderstanding that was resolved. I feel more pro-Greek than ever,” Hoelscher-Obermaier later told reporters.

Greece has been pressed by its international creditors, the EU and the International Monetary Fund, to cut thousands of jobs from its cumbersome civil service to earn bailout loans.

Some 30,000 people protested in Athens last month when Merkel visited Greece. Greek views on Germany, already tainted by the memory of a brutal occupation by Nazi forces during World War II, have been further strained by the eurozone crisis.

Many Greeks see Germany at the forefront of pressure for tough austerity reforms that have plunged the economy into the worst recession witnessed in postwar Europe.

German officials have for their part accused Greece of dragging its feet on reforms and wasting precious time bought by EU-IMF loans, to which Berlin in a major contributor.