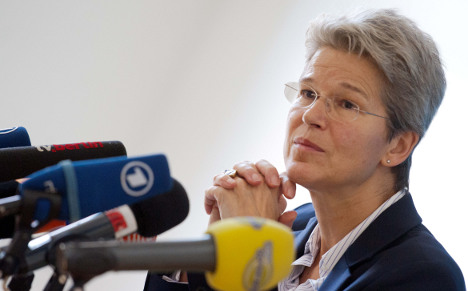 Claudia Schmid, head of the Berlin Office for the Protection of the Constitution, requested a transfer to another job the day after she announced that her office had illegally destroyed files on the far-right “Blood & Honour” organisation rather than presenting them to the Berlin state archive. She described the action as a “regrettable mistake.”

The head of the authority’s department on extremism, responsible for the most recent case of illegal file shredding, has also stepped down from his post. Further employees are subjects of an internal investigation for their role in destroying the files.

It is still unclear whether the destroyed files were connected to the case of the National Socialist Underground terrorist organisation, which went undetected for over a decade. However, the files did contain information on “Landser,” a neo-Nazi band with whom an authority employee was once friendly.

In her transfer request, Schmid said the revelations meant she was no longer in a position to fulfil her duties, adding that she wanted to make way for “a controlled new beginning,” Berlin’s Interior Minister Frank Henkel told a meeting of the Office for the Protection of the Constitution Committee in the Berlin Senate on Wednesday.

Henkel called for a general “staff rotation” and discussion on restructuring the authority in the face of the “serious structural failures” and highly embarrassing revelations.

Over the past weeks and months, the security services had taken a “serious blow,” said Henkel, referring to ongoing internal and parliamentary investigations into the illegal destruction of files on far-right terrorist organisations, including the NSU.

The scandal – which has now seen five local security service heads step down from their posts – has shaken the German public’s faith in the security services to its core.

While Henkel said the scandal had damaged the authority’s reputation, he said he still put it down to a “series of regrettable human errors,” which “gives a disastrous overall picture.”

Members of the opposition Green and Pirate parties raised concerns in the committee meeting that Schmid’s departure would inhibit the authority’s internal investigation and an ongoing parliamentary inquiry into the file-shredding affair.