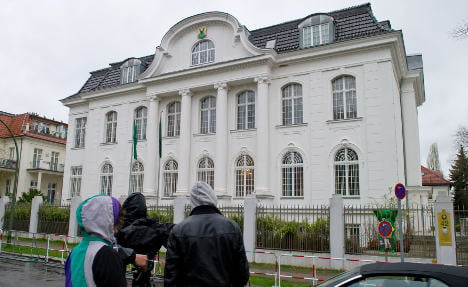 Six embassy workers – without diplomatic status – and one petitioner were involved in an argument inside the embassy, the Berliner Morgenpost newspaper reported on Wednesday.

The row is said to have quickly escalated into a fight, during which a 34-year-old embassy employee stabbed a colleague in the thigh with a pair of scissors.

He then stabbed several other people before fleeing the building, but police were able to apprehend him nearby. The victims had their stab and cut wounds treated in different hospitals, and have all since been released.

The attacker also complained of cramps and was also taken to hospital, though he was released later and taken into police custody. Another man involved in the row is also being treated as a suspect.

The cause of the argument remains unclear. Eye witnesses reported seeing a commotion outside the embassy before the fight. The row was reportedly about payments owed to Libyan army veterans, which embassy employees were accused of embezzling.

The police did not want to comment on the causes, describing the situation as “confused.” Investigators are still interviewing those involved. There was also no police comment on earlier reports that the man initially attacked with the scissors had started the fight.