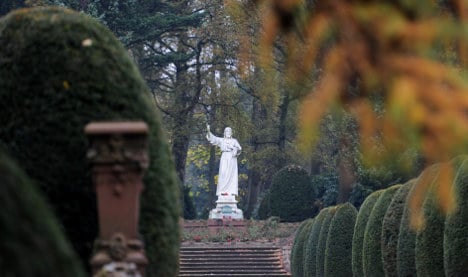 The van of bodies was ready to be driven from Berlin to a cut-rate crematorium in Saxony last month when it was stolen. Families waited for weeks to reclaim the bodies of their loved ones, which were eventually found in Poland.

Their distress was a result of what macabre critics are starting to call ‘corpse tourism’ – increasing numbers of bodies are being driven hundreds of miles to discount crematoria in distant parts of the country.

Reports suggest that some are even making grim farewell tours as far as the Czech Republic in a bid for knock-down prices.

Many German undertakers are deeply uneasy with these developments, blaming tight-fisted relatives for driving down costs – and standards.

“Maybe it’s got something to do with this cheapskate mentality we’ve got,” Carsten Pohle, chairman of the Union of German Undertakers told The Local.

“Price is very important. Many of the bereaved are now more careful with money. And eight years ago insurance companies stopped contributing to burial costs, which has certainly sped up the development.

“There are now a lot more discount undertakers advertising,” he added. “You could say there was a price war going on.”

The growth of price-comparison websites certainly indicates a sea-change in attitudes: the days are long gone when it would have appeared inappropriate for the bereaved to make financial calculations.

Domestic coffin producers have been struggling in the face of competition from foreign imports, mostly from Eastern Europe. Discount providers now import two-thirds of their coffins, while domestic industrial production fell by 30 percent between 2003 and 2011, according to figures from the German association of funeral suppliers.

Cremation, once a rarity, is fast becoming the norm, and overtook burials for the first time last year. In urban areas the trend is overwhelming: 67 percent of Berliners that die are now cremated, said Pohle.

At the same time, speedy anonymous burials – usually following cremation – are on the rise.

Something significant is happening with how the nation is treating its dead. But what does it mean? Does the demise of traditional funerals, ornate coffins and regular grave-tending suggest a culture that no longer respects the dead?

Hamburg researcher Norbert Fischer said the picture was not so clear-cut. On the one hand, he agreed that anonymous burials suggested “a pragmatic, demystified way of dealing with death.”

Yet he stressed that other trends seemed to point in a different direction. “Overall, the biggest tendency had been towards a departure from ritual,” he told The Local.

“This is connected with the personalisation and privatisation of the mourning process, as well as a turning away from the crematory as the traditional place of mourning and remembrance,” he said.

He pointed to the rapid growth in alternative burials, which place a greater emphasis on the identity of the deceased. Innovative gravestones are on the rise, as are communal graves with a certain identity, such as the “Garden of Women” in the Hamburg-Ohlsdorfer cemetery, and burial areas set aside for stillborn babies.

The internet has provided fertile ground for the bereaved seeking new ways to keep memories alive. Electronic condolence books, mourning blogs, even a “virtual graveyard” of obituaries where visitors can leave comments suggest a common desire to commemorate in more immediate and personal ways.

Pohle also said he had noticed relatives placing more demands on funeral companies personalising their farewell. “They have many more individual wishes. They often want a more secular burial with new rituals. The music in the funeral service, for example, reflects this,” he said.

“People no longer want just an organ playing standard pieces, but want to pick music that was special to the deceased. So a widow might select the music played at her wedding.”

The increase in the number of woodland cemeteries represents yet another facet of this diversification. They have grown dramatically since legal restrictions were relaxed in 2000.

“Originally there were no options apart from a traditional burial. Since alternatives were introdcued, more and more people are taking them up”, Corinna Brod told The Local.

Brod is spokeswoman for the alternative woodland burial organisation FriedWald, which scatters the ashes of the dead at the roots of a tree. The company opened in 2001 with one location; it now has 44 across Germany, and is aiming for 80 by 2018.

She attributed the change to demographics and practical considerations.

“There are a lot of single people, and families are smaller. This means there are fewer people to tend to graves. Often there’s simply nobody to do it. Our service takes care of that, which makes it attractive for some people”, she said.

But the main reason for people to opt out of traditional ceremonies was more spiritual, she said. “In a recent survey we found that most people connected the woodlands with the hope that death wouldn’t be so bad.

“They come and find the place just incredibly peaceful, the trees comforting, and the surroundings beautiful, she said. “They think: maybe it wouldn’t be so bad to die. Our society is always confronted by death, and in the end we all just hope that it won’t be so terrible. This sense can be part of the attraction of alternative burials.”

Though the established ways of mourning may be on the wane, it would be hard to argue that Germans are forgetting their dead.