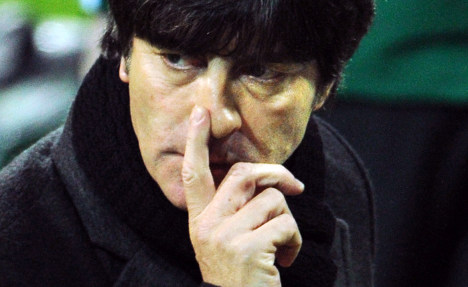 Löw has concerns after Bayern centre-back Jerome Boateng injured his groin during in Munich’s 2-0 win over Frankfurt on Saturday, while Dortmund left-back Marcel Schmelzer hurt his foot in their 3-1 win over Augsburg.

There was more bad news as vice-captain Bastian Schweinsteiger cried off with a virus on Sunday, while Bayern team-mate and fellow midfielder Toni Kroos has stomach problems.

And on Monday it was confirmed that Mesut Özil and Miroslav Klose would not play.

Klose, the only out-and-out forward in Löw’s original 22-man squad for the game, is suffering from flu while Real Madrid midfielder Özil has muscle problems.

Holland, under former Bayern Munich coach Louis van Gaal, host the Germans in Amsterdam with the guests determined to prove last month’s 4-4 draw with Sweden – after having built up and thrown away a four-goal lead, was just a blip.

“From an educational point of view, it would be the wrong approach if we spend a few hours talking about the Sweden game,” said Löw.

“We will certainly look at it as part of our preparations, but I won’t look at it for too long.

“Dealing with the last 30 minutes is a continuous process.”

Despite a cold, Bayern forward Thomas Müller insists this is one game he does not want to miss.

“This is a class event, which we are all looking forward to,” said Müller.

“We’ll be representing our country will complete passion and doing what we were born to do: play football for Germany.”

But not everyone shares Müller’s passion for the friendly: Bayer Leverkusen boss Rudi Völler has questioned the logic of a meaningless international in the middle of the Champions League and Europa League programme.

“The problem is the players have a lot of demands on them at the end of the year,” admitted Löw, who has said he will use his bench.

Also, Hamburg goalkeeper Rene Adler has forced his way back into the squad after some impressive displays in the Bundesliga and is battling Bayern’s Manuel Neuer for Germany’s Number One shirt.

“We will deliver a high-intensity game,” said Löw.

“Matches against the Netherlands are always special, even if it is a friendly match only. There is a lot of prestige on this fixture.”