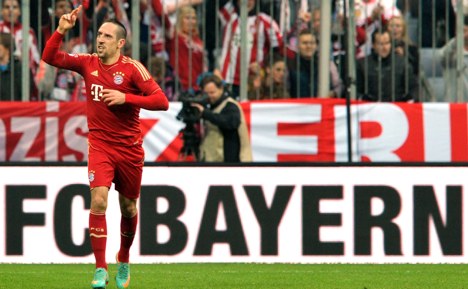 “We were up against opponents who are in a league of their own,” said Veh, who won the Bundesliga title with VfB Stuttgart in 2007. “We tried to press Bayern early and not let them get going.”

“We did that very well, but Bayern are smart and you have to cover a lot of ground. The second goal settled the outcome and it broke our resistance.”

Ribery scored their first a minute before the break, then Bayern made sure of three points at the Allianz Arena when Alaba netted a 77th-minute penalty after a foul on Bastian Schweinsteiger in the area.

After their 6-1 rout of Lille in the Champions League on Wednesday, when Bayern raced into a 5-0 lead after just 33 minutes, this was a workman-like performance against third-placed Frankfurt.

“That was a hard-earned victory against a very good team,” said Bayern boss Jupp Heynckes. “Especially in the first half, we didn’t look determined enough. Frankfurt played good football and were full of running, it’s hard to refocus after the Champions League.

“You can’t always score six goals and play superb football, but we showed we’re capable of the right reaction in a difficult situation.

“At the end of the day, we made the most of our experience and intelligence.”

Second-placed Schalke 04 stayed in touch with Bayern after coming from behind to beat Werder Bremen 2-1 in Gelsenkirchen.

Bremen’s Aaron Hunt scored his third goal in two games on 16 minutes to put the visitors ahead at the Veltins Arena.

But Schalke midfielder Roman Neustädter celebrated his first call-up to the Germany team on Friday with the equaliser on 59 minutes as he rose highest to a corner and header home.

His Germany team-mate Julian Draxler then scored Schalke’s second after finishing off a superb counter-attack started by the Royal Blues’ goalkeeper Lars Unnerstall on 69 minutes.

“If you fall behind against such a strong team as Werder Bremen, it makes things very difficult,” said Schalke coach Huub Stevens, whose side came back from 2-0 down to draw with Arsenal in the Champions League on Tuesday.

“But just as against Arsenal, we came back. The character of the team is simply great. We earned the luck we had towards the end of the match.”

Defending champions Borussia Dortmund moved up to fourth with a 3-1 win at bottom side Augsburg.

Having only been denied victory by a late goal at Real Madrid on Tuesday in the 2-2 Champions League draw, Dortmund turned in another convincing display.

“That was hard work in the first half, it was a very, very tight match, with a wonderful goal for us, then our goalkeeper reacted well to deny Augsburg,” said Dortmund coach Jürgen Klopp. “Things were clearly better in the second-half, we scored two nice goals and controlled the game.”