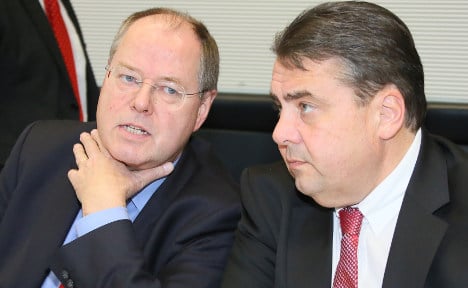 Peer Steinbrück is standing against Merkel in next year’s election – but may have ruined his party’s chances of taking over government, the Süddeutsche Zeitung newspaper said.

A heated debate over his additional earnings of €1.25 million over the last three years giving speeches including €25,000 for a speech to partially state-owned utilities company Bochumer Stadtwerke – has alienated not only the electorate, but also the Social Democratic Party’s (SPD) potential coalition partners the Green Party.

The Greens are starting to question Steinbrück’s leadership qualities, the paper said, despite having publicly stated it would work towards forming a coalition with the SPD in the hope of replacing Merkel and her Christian Democratic Union, CDU.

The Greens, currently on 14 percent in opinion polls would be a crucial partner for the SPD, currently on 30 percent, if together they wanted to topple the CDU, which is sitting comfortably at the top of the polls with 40 percent, according to a poll by Infratest Dimap for Die Welt newspaper on Friday.

The poll suggests the CDU’s current junior coalition partner, the Free Democratic Party, FDP, would not even clear the 5 percent hurdle needed to enter parliament.

But the current scandal is making the Green party – and the public – have second thoughts about the Social Democrats and their chosen leader, wrote the paper.

“Such a beginning makes it difficult.” Ekin Deligöz, deputy leader of the Green parliamentary party told the paper, adding that the SPD would no longer be able to rely on their old strategy of pinning their whole election campaign on one person. “This person alone cannot be the program.”

“Social justice will be an important topic next year,” Sina Doughan, spokesman for the youth wing of the Green party told the paper.

“It’s difficult if Peer Steinbrück just gets rich the whole time and lines his own pocket with money,” she said, adding that the scandal had damaged his credibility on the topic of social fairness.

Another recent poll for broadcaster ARD showed Steinbück had lost two points of support since last month in a direct popularity comparison with Merkel. He was down by one point on credibility and down by five points in the public’s view of him as a champion of social justice.

Meanwhile, Merkel was up on all counts, wrote the paper.